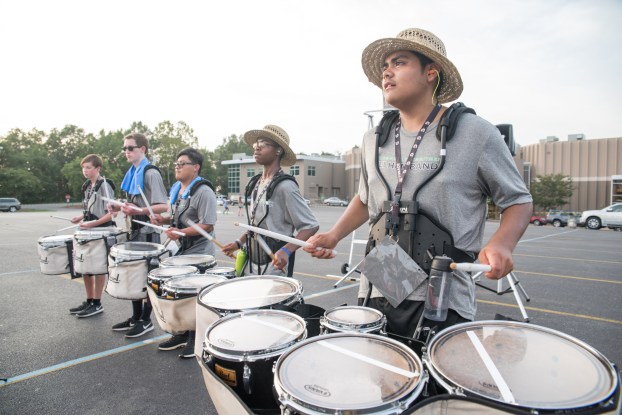 Band camp is under way for the 140-member Pelham High School Marching Band until Aug. 8. Students are busy learning the field show that will be performed at PHS football games. (Reporter photo/Keith McCoy)

PELHAM – By the end of band camp, the Pelham High School Marching Band will have completed 128 hours of rehearsal, much of it outside in the sweltering heat, within a three and a half week period.

Putting on a good halftime show at the school’s football games is not a task the band takes lightly. A two-week band camp, from July 24-Aug. 8, is under way for the 140-member band, but individual groups were already practicing before then, said band director Justin Ward.

The band squeezes a lot into two weeks of practice. The weeks are spent learning and perfecting two field shows: the one that will be performed at football games and a competition show.

This marching band season, the band’s field show will be a salute to Broadway featuring music from Hamilton, Les Misérables and Phantom of the Opera. The band is busy learning field movements called drills and memorizing music while the visual ensemble is learning choreography.

“It’s a lot of rehearsal so a little variety keeps it fresh,” Ward said. “We only have one practice on Wednesdays because rest is important. We want to make sure we pace them and give their bodies time to recuperate. We talk to the kids a lot about nutrition, staying hydrated and taking care of their bodies because the heat can be brutal. We’ve had melted shoes before on the concrete.”

The band camp schedule can be a bit overwhelming for freshmen entering the program, so Ward said a mini-camp is held for freshmen in May.

“During the mini-camp we give them a taste of what band camp will be like,” Ward said. “We teach them how to march and try to acclimate them to the process. We like to do it in May when the heat is not as brutal so that they can ease into it and not be so overwhelmed.”

Pelham Band Boosters provide water, popsicles, bags of ice and towels to students while they’re practicing outside to help keep them cool and hydrated.

Ward said the band will begin learning their competition show called “Flock,” but they won’t get around to learning all of it.

“Since it’s for competition, it’s more challenging and difficult so we like to start learning it as soon as possible,” Ward said. “We’re also learning stand tunes, cheers and the fight song. Camp really lays the groundwork for the year.”

Once school begins Ward said the band only practices about 6 hours per week, which is why band camp is so important.

The band’s stand tunes consist of a mixture of popular songs that students will know and timeless songs that all generations will enjoy. The set list includes 24K Magic by Bruno Mars, Chained to the Rhythm by Katy Perry, Sweet Caroline by Neil Diamond and September by Earth Wind and Fire.

Ward said the band camp wouldn’t be successful without the support of band booster parents and the 15 college students, area musicians and others with related experience that were hired as band camp instructors.

“We’re looking forward to an exciting season and we can’t wait to share it with everyone,” Ward said.

PELHAM – A panel of four superintendents from throughout Shelby County gathered at the Greater Shelby County Chamber of Commerce’s... read more