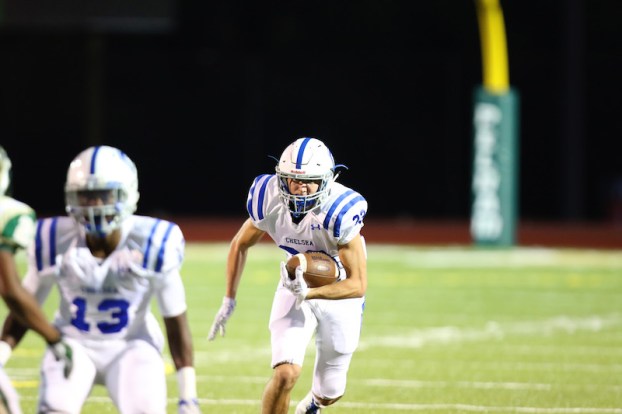 Hunter Offord will be the leader of the defense in 2017 and is hoping to help the that side of the ball improve after giving up 30-plus points a year ago. (File)

It happened again in 2016, for the second straight year, the Chelsea Hornets’ football season ended with a heartbreaking first-round loss in the playoffs that forced star running back Zalon Reynolds to take off his jersey and break down crying in the middle of the field, while head coach Chris Elmore delivered a post-game speech about how proud he was of his guys.

Now in 2017, Chelsea is going into year five of the Elmore era and hoping to continue a successful trend that features improvement every season. Starting in 2013, Elmore led the Hornets to four wins, but progressed to six, seven and eight wins in the years to follow including back-to-back playoff appearances the last two seasons.

While the Hornets lose a top producer at every position, Elmore has possibly his most depth since taking over the job. This is a Chelsea team hoping to put last year’s heartache to rest and not only make it to the playoffs for the third consecutive win, but improve and make it to the second round for the first time since 2007.

There is no mistaking it, if this Chelsea team is going to have that type of season, it’s going to take a lot of production from guys that weren’t even on the field last season.

Starting on the offensive side, the Hornets will lose close to 95 percent of their offensive production mainly in the form of quarterback Mathew Marquet and running back Zalon Reynolds.

A year ago, those two combined for 4,408 yards and 53 touchdowns on the offensive side of the ball to help the team set a team record by scoring 455 points in a single season.

Those two guys flourished in Elmore’s system, but it’s proven to work no matter who is running the offense as the team has scored 37.4, 30.2, 31.7 and 41.4 points per game since Elmore took over in 2014 consistently giving them more than 30 points per game each season.

This is exactly what the Hornets are hoping for in 2017 as they turn the ball over to a new quarterback and running back. Taking the reins at the quarterback position will be either Alec Little or Turner Griffin. Little seems to be getting most of the first-team reps, but Elmore isn’t opposed to both guys seeing a lot of playing time if necessary.

Joseph Turnes and Kendrick Simpson, both seniors, as well as junior Vick Lindsey will be the running backs looking to replace Reynolds’ 1,886 yards and 20 touchdowns. Simpson is a powerful back, while the other two add a speed and slashing running style for a great combination.

Leading receiver Jay Vickers is also gone after picking up 452 yards and seven touchdowns a season ago. Colby Lambert, Colton Carter, Lando Nichols, Jonah Moore and Reggie Fisher will all be solid trustworthy guys that the coaching staff is excited about, but one will have to emerge as a go-to target, which is still up in the air going into fall practice.

In the spring, the offensive line was probably the biggest concern for Elmore, but as the summer progressed, several guys have stepped up and emerged at the position. Charlie Parkinson, a 6-foot-3, 270-pound sophomore has solid potential to be a leader of the line. He’ll be joined by Spencer Jordan, who brings back the most experience and will anchor the line, as well as Mark Moody, Jackson Dunn and Caleb Gore.

While the offense has plenty of question marks, the defensive side of the ball has just as many if not more. Warner Wright will be the leader up front on the defensive line for the second year in a row on the end, but fellow defensive end Regan Wortham is gone and takes 40 tackles and five sacks along with him.

Dalton Gentle, Wesley Pouncey, Hakeem Stanford and Jordan Smith will all have to step up and help out at the position, with Gentle being the only senior of those four. They are young and need to prove themselves on the field, but the coaching staff is excited and has liked what they’ve seen in the offseason.

Chelsea may lose Jalyn Miller at the linebacker position, who accounted for 89 tackles, four fumble recoveries, two interceptions and two sacks, but they do get back Hunter Offord.

Elmore has described Offord as the quarterback of the defense this summer. Last season he tore his ACL the week before the Hornets’ playoff game with Cullman causing him to miss the game, which was possibly a big reason for the difficult loss.

He will bring back an edge with him in 2017 and help fellow linebackers Desmond Battle and Will Hayes as well as Stephen and Matt Fant do exactly what is needed to be successful.

Sliding back to the secondary, Chelsea might have the most production returning as twins Reed and Carter Burleson are back for their senior seasons.

Elmore has said there will be four different guys that can compete at the safety position as Kendrick Simpson, Dylan Seabold, Connor Griffin and Scott Arnold can all play if needed. While Bryson Hardy has graduated and accounted for 82 tackles and three interceptions during his senior season, Chelsea has by far its most depth and excitement in its back four.

Chelsea is one of those teams that I am going to have to see before I can judge how successful the team can be in 2017.

Losing almost all of your offensive production and a key starter at every position from top to bottom will be an extremely difficult task to overcome. That being said, Elmore is an offensive genius and I will not be surprised whatsoever if he gets the Hornets’ offense clicking this season.

The entire season is in front of Chelsea and anything can happen, but this team is the most difficult to get a feeling for until they prove something on the field. What does help the Hornets, however, is that the playing field in Class 6A Region 3 has been leveled where all of the teams have a lot to replace.

Even if Chelsea has a down year, they should easily be in contention for that fourth playoff spot at the very least.

By ALEC ETHEREDGE | Sports Editor ALABASTER – For the past 10 years, since the days of waking up his... read more