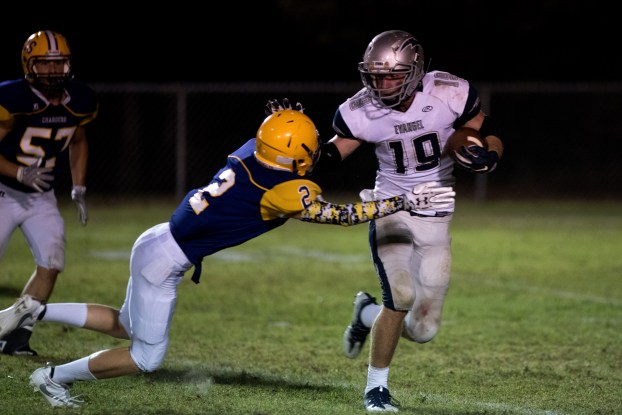 Rhett Edmondson, No. 2, will be looked at as a leader at the linebacker position for Cornerstone in 2017 as the team looks for its fourth straight playoff berth. (File)

It’s a new era in the AISA as all three of our county teams in the division are transitioning into a new head coach. Two of those three teams are looking for a complete turnaround in Coosa Valley and Kingwood, while Cornerstone is looking for continued success.

With the first games kicking off in less than two weeks on Friday, Aug. 18, it’s time to take a look and predict what to expect from each of these three head coaches in 2017.

After an 0-19 stretch in 2014-2015, Coosa Valley picked up two wins last season to end the winless streak, but a 2-27 record is not something they take pride in over the last three seasons.

Dane Reece has now taken control of the program and is excited for what’s to come in his first season with the Rebels.

Coosa Valley, who opens with a home matchup against Hooper on Aug. 18, will have a lot of veteran leadership on this year’s squad to help turn things around in 2017.

Offensively, senior quarterback Mason Houston and senior wide receiver Chase Carlee will both return to lead the team. They’ll be joined by a balanced rushing attack with a split backfield that features powerful senior Stone Dorough as well as speed guys in juniors Lew Dale and Jacob Walton.

Last season, the Rebels gave up close to 40 points per game, making the defensive side of the ball a point of emphasis this year. Most offensive guys will have to play on both sides of the ball from the line back to the secondary, which gives the team a level of athleticism at every position.

Dorough and Carlee will be two guys that can play anywhere but should play a lot of snaps at the linebacker position, while Trip Allen returns to handle the secondary.

The defense gave up 40-plus points in all eight of Coosa Valley’s losses in 2017, which is something that has to improve if they want to have immediate success under Reece.

It definitely won’t get any worse with a lot of experience back and with an offense that improved down the stretch last year, Reece’s first year should feature a team with a lot more passion and excitement. Making the playoffs should be the expectation considering a 1-4 region record earned a berth for Kingwood last season.

Tim Smith spent 17 seasons as the head coach of the Cornerstone Chargers, but that era has officially come to an end as he took over as Evangel’s first full-time paid coach and athletic director in the offseason.

James Lee, an assistant with the Chargers, will be the new guy at the helm when Cornerstone takes the field on Aug. 18 for their first game of the season at Sparta.

The good news is that Lee brings an understanding of his team and his team knows and respects him; the problem is the amount of talent the Chargers have to replace.

Gone from the offense is Tyler McNamee, who threw for 1,563 yards and 21 touchdowns, as well as Jo-Jo Joiner, who totaled 806 yards and 15 touchdowns receiving, and Logan Tucker, the team’s starting running back.

Rhett Garrett (QB), Ben Perryman (WR) and Patrick Howell (RB) will be the three leaders looked upon to step up at each of those positions come game time.

While Cornerstone has deficiencies on defense as well thanks to most guys playing both sides of the ball, the team quite possibly has the best lineman in the state in senior Landon Guy.

Playing in the same division as Coosa Valley and Kingwood, I would still predict that Cornerstone will be the best of those three teams in 2017. It’s just hard to imagine that the Chargers will go from region champions to missing the playoffs despite losing the amount of offensive talent they did.

While Cornerstone may finish closer to 3-2 in region play this season, I fully expect the defense to continue the strong trend it started last season and give up less than 20 points per game to send them to the playoffs for the fourth consecutive year.

Kingwood was the team that edged out Coosa Valley for a spot in the 2016 playoffs by taking the head-to-head matchup between the two, but that doesn’t mean the Lions had the successful season they hoped for last year.

A 2-9 overall record and 1-4 region record is something the Lions hope to improve on in 2017 as Todd Bradford takes over the reins. Bradford comes from St. James in Montgomery where he spent the last two seasons and hopes to help the Lions improve on their 9-22 record the last three years.

Kingwood loses a lot of offensive production this season as its top three receivers and starting quarterback have all either graduated or transferred to a different program.

Running backs Jayton Denard, Parker Foshee and Tyler West, however, will attempt to soften the blow. Bradford says those three guys have created a position that he feels confident will produce. Kingwood will need all of them to step up in multiple roles as they replace their entire receiving corps and start a new quarterback.

The defense is looking to improve on the 37.1 points per game it gave up in 2017 and the secondary will be the leader in doing so. Antonio Ruiz, who will also play receiver, will return as the top cornerback and will be joined by Foshee, West and Jacob Bradford.

The front seven is the real question mark considering the linebackers are still a complete toss up and the defensive line will be playing on both sides of the ball.

This 2017 Kingwood team will undoubtedly make strides under Bradford, but there is a lot of uncertainty with the loss of so much offensive production that it’s hard to tell just how much this team will be able to accomplish.

For now, I would expect the Lions to battle for the fourth and last playoff spot in AISA AA Region 1, similar to Coosa Valley, considering that is a very realistic goal that they accomplished in a down year last season.

By ALEC ETHEREDGE | Sports Editor PELHAM – Pelham athletics has been on the rise over the last several years... read more