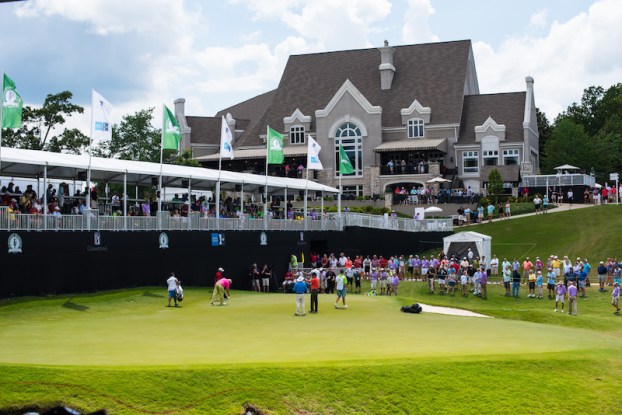 Volunteer registration is now open for the 2018 Regions Tradition and there is an incentive for new and returning volunteers. If you register by Sept. 30th then you will receive free round of golf at either The Founders or Legacy Course at Greystone Golf and Country Club. (File)

HOOVER – Volunteer registration for the 2018 Regions Tradition, Alabama’s annual PGA TOUR Champions tournament is now open and there is an incentive for both new and returning volunteers to register early for next year’s tournament.

“Our volunteers really enjoy this unique experience and find it very rewarding; I think our high retention rates prove that,” said George Shaw, Executive Director of the Regions Tradition.

The Regions Tradition is seeking to recruit 1,000 volunteers to help support every element of the 2018 tournament. Joining the team of volunteers provides sports fans with a fun and rare opportunity to experience the inner workings of a professional sporting event, and see PGA TOUR Champions stars like John Daly and Miguel ´Angel Jiménez from a unique perspective.

Volunteers can choose to serve from a variety of 20 different committees, and are asked to work at least three shifts, approximately four to six hours each.

Volunteers that register by Sept. 30th can purchase the Uniform Package for just $40; a fee that helps offset the cost of the volunteer uniform, and thereby supports the tournament’s endeavor to donate as much as possible back into the local community.

The tournament’s final charitable impact for 2017 is still being calculated, but the 2016 tournament generated $1.1 million for over 80 local charities, including Children’s of Alabama, which serves as the primary beneficiary of the Regions Tradition.

PGA TOUR Champions is a membership organization of golf’s most recognizable and accomplished players, age 50 and older, including 32 members of the World Golf Hall of Fame.

The Tour’s mission is to provide financial opportunities for its players, entertain and inspire its fans, deliver substantial value to its partners, create outlets for volunteers to give back and generate significant charitable and economic impact in tournament communities.

In 2017, the PGA TOUR Champions schedule includes 26 tournaments in 18 states, Japan, Wales and Canada, with purses totaling more than $55 million. The Charles Schwab Cup, which includes the Regular Season and the Charles Schwab Cup Playoffs, is used to determine the season-long champion.

All events are televised in the United States, with most receiving complete coverage on Golf Channel, the exclusive cable-television partner of PGA TOUR Champions. Internationally, telecasts air live, tape-delayed or in a highlights-package format in excess of 190 countries and territories, reaching more than 330 million potential households.

Greystone Golf & Country Club is an active and vibrant private club that is nestled in the Valley of Double Oak Mountain, located in the Birmingham-Hoover metropolitan area.

The Club is the cornerstone of the 1,400 home gated community which offers two world-class championship golf courses: Founders and Legacy.  The Founders Course was designed by renowned architect Bob Cupp, and was established in 1991.

The Legacy Course, located approximately three miles from the Founders Course, was designed by world-famous architect Rees Jones, and was established in 2000.  Greystone Golf & Country Club is the fabled home of the Bruno’s Memorial Classic, which was played at the Founders Course 1992-2005, and will again host Champions Tour players for the Regions Tradition in 2016, 2017, and 2018.

By ALEC ETHEREDGE | Sports Editor In its first two years as a school, Helena’s football team found itself in... read more