Maybe you feel as I do about Sherlock Holmes—captivating though Arthur Conan Doyle’s tales could be, there was an undercurrent of amusement as I read them.

Sherlock just seemed to know sooooo much, and Dr. Watson’s naiveté begged the question: how had he got through medical school? 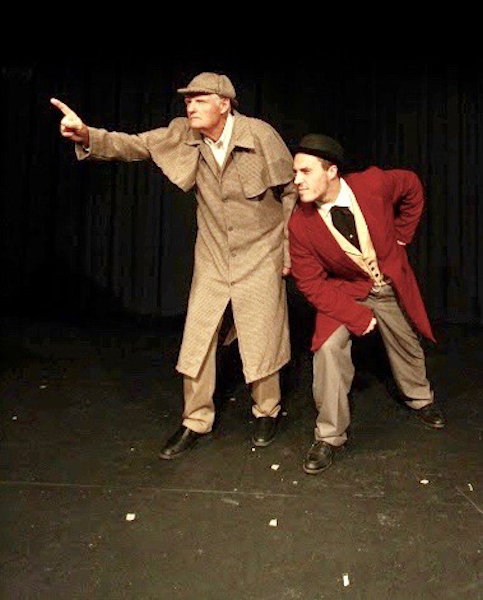 Now, it is OK to laugh . . . in fact, you are not going to be able to keep from guffawing when “Baskerville: A Sherlock Holmes Mystery” by Ken Ludwig opens at Parnell Memorial Library Theatre Aug. 10.

A Montevallo Main Street Players production, it is directed by Jake Beatty and produced by Gwendolyn Treptow, stars Bill Nixon as Holmes (deerstalker hat and all) with Taylor Coe as his sidekick, Dr. Watson. If Coe brings a bit of Charlie Chaplin to Baker Street, that is understandable.

“This play does include some slapstick,” Beatty said. “I describe it as ‘Monty Python’ meets ‘Carol Burnett.’”

“Baskerville” is staged without scenery. On a black stage with only a few essential props, the crew melds into the show’s elements. Take, for example, the horse-drawn carriage featuring stagehands and Monty Python-esque coconut shells.

The British humor is so dry that some may not start laughing until the between-act intermission. For those less slow, the chuckles abound, often at the expense of Dr. Watson’s lame deductive powers.

Nixon, as it turns out, is the real “doctor” here.  He holds a doctorate in organic medical chemistry from the University of Georgia. He comes to the Montevallo stage via 39 other community theatre roles elsewhere during a 43-year teaching career.  Nixon’s agility on stage is not too surprising as he was an undergraduate baseball player at Georgia Tech.

Coe very naturally brings agog disingenuousness to his role, as he is much younger than the part he plays. Closing in on a degree from the University of Montevallo, Coe is making his second appearance with MMSP. Previously, he performed in “1984.”

These are the main roles, but the play is rife with many more characters although they are played by a handful of actors, each of whom assumes multiple identities.  These are:

—Cassidy Le (Actress 1), making her fourth appearance with MMSP.  You may previously have seen her in “Steel Magnolias” and “Good Deeds, Deadly Deeds,” and she was in the crew for the “1940’s Radio Variety Show.”

—Claire Martin (Actress 2), a high school junior and a veteran on the boards. This is her fourth production.

— Mary Purvis (Actress 3), a high school senior with experience in the Red Mountain Theatre Company. She is a trombone player with the Montevallo Marching Troubadors.

By NANCY WILSTACH / Community Columnist Montevallo’s youngsters are so popular in its Japanese sister city that Echizen Town had... read more