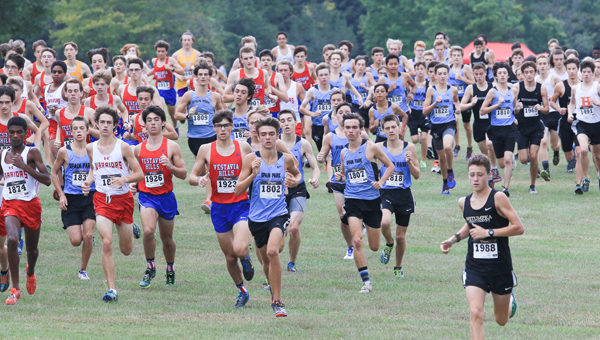 The season will begin for Spain Park’s boys and girls cross country teams on Sept. 2 at the Memphis Twilight event. (FILE)

HOOVER – The situations could not be much different for Spain Park High School’s boys and girls cross country teams.

One team is returning most of its runners a year after one of its best ever campaigns, while the other team graduated almost all of its contributors after qualifying for the state tournament.

And Michael Zelwak, entering his 14th season as head coach at SPHS, has to figure out a way to help both teams reach their potential.

The runners mostly condition on their own over the summer, but once the school year begins, workouts become more structured—building up the runners’ aerobic capacities, targeting weak areas and adjusting to the demands of a 5K.

The SPHS girls finished seventh in last year’s state tournament, but new faces will replace almost all of the team’s top runners.

“They have some pretty big shoes to fill,” Zelwak said. “I’m curious to see how they compete in the first meet and see where they are.”

Spain Park’s boys, meanwhile, did not qualify out of their region tournament as a team, but three runners did qualify for state as individuals.

The season will begin for the cross country teams on Sept. 2 at the Memphis (Tennessee) Twilight event and continue on Sept. 9 with the Chickasaw Trails run before the Jaguars return home on Sept. 16 for the Spain Park Cross Country Classic, with runners racing at Veterans Park adjacent to the school.

Other events on the schedule include Asics Clovis Invitational or Jesse Owens on Oct. 7, the Crimson Classic at the University of Alabama on Oct. 12, Dew It on the Trails on Oct. 14, Hoover Invitational on Oct. 19 and JV Championship on Oct. 30.

The Return: Jake Ganus back where he belongs

By ALEC ETHEREDGE | Sports Editor Timing is one of the most underappreciated aspects in life. Our lives take shape... read more