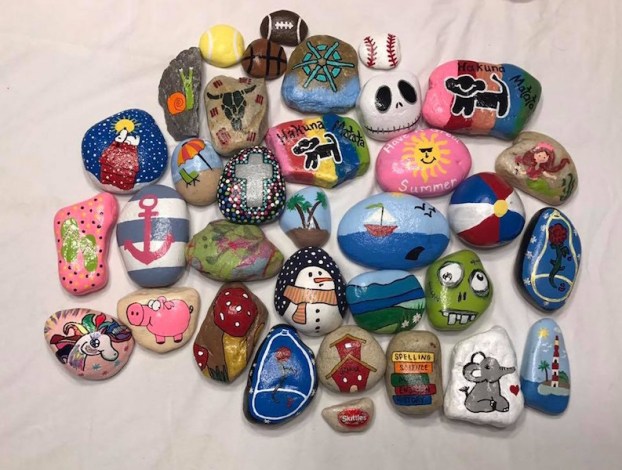 Pictured are painted rocks from Wilsonville. People of all ages are participating in the Columbiana and Wilsonville Rocks Projects, which are designed to spread kindness one rock at a time. (Contributed)

From the window of my office at the Shelby County Museum & Archives, I am able to witness a lot of what happens in Columbiana. In recent months I have watched as children and adults slowly walk around the building, peeking into the bushes and checking behind staircases. They are in search of something very important, something that brings them much happiness.

They are searching for rocks, but not just any rocks. These rocks are special because they are painted. There were three of them hidden outside the museum when I arrived this morning.  I know this because I always take time to circle the building and find all the clever hiding spots.

By the time I leave this afternoon they will be gone, replaced by new rocks tucked into new hiding spaces.

If you have spent anytime walking the streets of Columbiana you are bound to have seen more than a few painted rocks, tucked away in the bushes, or sometimes just lying out in the open.

This fun project, called Columbiana Rocks, was founded locally by Katie Horton, and is based on the Kindness Rocks Project, which has a nation-wide goal of spreading kindness to others one rock at a time.

“Columbiana Rocks is an offshoot of the Kindness Rocks Project started by Megan Murphy,” explained Horton. “We aim to create works of art, on rocks, to hide for others to find. These rocks inspire children, and adults, to create while also getting outdoors. When a rock is found you are encouraged to re-hide it.”

It seems the project, which was started in June, has really had an impact on Columbiana.

“Anyone can participate,” said Horton. “We have a Facebook page, Columbiana Rocks, which is where people post pictures of rocks being painted and found. The page lets you follow a rocks journey.”

The project has a devoted group of followers of all ages.

“We range from toddlers painting creations to elderly people,” Horton said. “In Columbiana there are birthday parties where they paint rocks. The Columbiana Library has hosted an event, and local churches are having rock painting events.”

Despite the start of the school year the project has not lost steam. Earlier this week, as I walked down the hall of Columbiana United Methodist Church, I saw a youth leader preparing a table of rocks for children to paint after Wednesday night supper.

So, if you come across a painted rock in Columbiana or Wilsonville, be sure to share a picture on Facebook, and then re-hide it. You never know how much happiness it will bring to the next person who finds it.

By JENNIFER MAIER / Community Columnist Columbiana’s Liberty Day celebration is a tradition that dates back 31 years. What started... read more