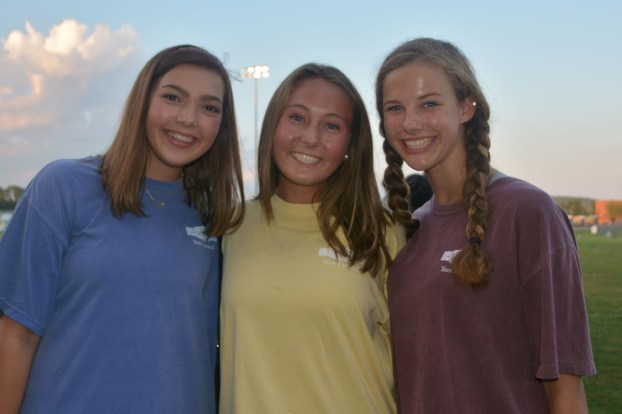 Members of the Alabaster Teen Council organized the city’s fourth annual Back to School Bash to celebrate the new school year on Aug. 19. (Reporter photo/Amalia Kortright)

Teens kick off new year at Back to School Bash

ALABASTER – The Alabaster Teen Council celebrated its fourth annual Back to School Bash at the Alabaster Municipal Park from 6 to 11 p.m. on Saturday, Aug. 19. Teen council member Abby Grace Walker said the event offered teenagers ages 13-19 a chance to unwind before the new school year becomes too hectic.

“We’re giving teens a place to hang out with friends before it gets too busy,” Walker said.

During the event, visitors were able to enjoy inflatables, a DJ, karaoke, soccer games, vendors and knockerball, which is a soccer game where each player wears a large, inflatable ball.

Teen council member Savanna Rakestraw said knockerball was probably the most popular event, even if some players strayed from the game’s official rules.

“They’re just running around and bashing into each other,” Rakestraw said.

Walker said the event also served to offer a safe alternative to riskier activities that some teenagers may have engaged in otherwise.

“I feel like this shows teens that you can hang out without doing the horrible things that some teens are out there doing,” Abby Grace Walker.

Alabaster Mayor Marty Handlon said the same is true for all of the events that the Alabaster Teen Council organizes throughout the year.

“Having events like these keeps them from going out and making bad choices,” Handlon said. “Here, they can have good, clean fun.”

For Rakestraw, the event was also a way for teenagers to meet new people and make friends.

“Kids that come alone have someone to hang out with,” Rakestraw said.

“They wanted their own CityFest for teenagers. We don’t have any big name talent, but they do get karaoke and a DJ,” Handlon said. “Each year, it’s had things added to it.”

Handlon thanked the Alabaster Parks and Recreation Department and Karen Fillingham for the role they played in making this year’s Back to School Bash successful.

Handlon also said she and members of the teen council are pleased with this year’s turnout, and look forward to growing the event next year.

“It makes my heart happy and full to see them enjoy this kind of stuff,” Handlon said.