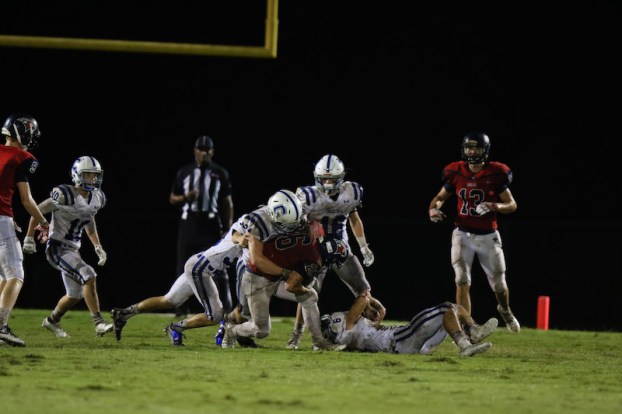 Chelsea will host Oak Mountain in a rematch from last year's opener this Friday night in our first Game of the Week for the 2017 season. (File)

The agony of the summer heat burning a desire in us for the return of high school football is finally coming to a close as football season is upon us and relieved feeling grasps us all.

After 270 days of no high school football in Shelby County, we are now just 72 hours away from our first AHSAA matchup of the year as Pelham will host Homewood at Samford University this Thursday at 7 p.m.

That will kick off an action packed opening week that features six regular season games, five rematches, three jamborees and one in-county matchup — which will also be our first game of the week this season. Below we will dive into those matchups and start our 2017 weekly football predictions.

The hype has been built up enough around Thompson during the summer, but now it’s finally time for the Warriors to prove it on the field. What better way for them to start the season than to test their talent against Hapeville Charter out of Georgia. Hapeville made a run to the 2A semifinals in Georgia a year ago and return both its starting running back and quarterback this season along with its top three receivers. A season ago, Hapeville averaged 28.9 points per game, relatively low, but only gave up 13.6. I fully expect the Warriors’ defense to pick up where it left off last year and hold Hapeville’s offense in check. That combined with all of the offensive playmakers for Thompson should create for a week one win as they look to prove this is their year. Thompson 31 Hapeville 10

For the second year in a row these two teams will square off to start the season. Last season, it was Spain Park coming out on top in a close 21-17 win on the road. This season, the Jags get to play host and hope to defend their home turf. Spain Park is a team that tends to rely on defense, but there are still several question marks on that side of the ball, meaning the team’s potent offense will have to start out as strong as they are capable of. If Braxton Barker and D’arie Johnson, along with the Jaguars’ three premier receivers can get this team in the end zone they should come out with a victory, but it will be a tight contest yet again. Spain Park 28 Gadsden City 21

Chelsea put up 49 points on the Eagles in 2016 to start the season, and there’s no doubt Oak Mountain doesn’t want that to happen again. Both teams lose a large chunk of talent, but specifically Chelsea with the loss of Zalon Reynolds and Matt Marquet offensively. It won’t be an indicator of how Chelsea’s season will go, but it might take a little bit of time for the Hornets to get up to speed early on. Based solely on experience of upperclassmen and returning playmakers, the Eagles should soar in this rematch in our first Shelby County Game of the Week for 2017. Chelsea 24 Oak Mountain 35

Last year, a loss to Homewood in a close 21-14 game sent the team in the wrong direction as they went on to finish the season 2-8. In 2017, Pelham hopes to pick up a win in the rematch at Samford University that will help the team start on the right track and give them a confidence they haven’t felt in a long time. This year’s matchup will feature two teams that bring back an array of experience as Homewood brings back a starter to nearly every positions and Pelham has 36 upperclassmen on its team—a luxury they haven’t had since splitting with Helena. I do believe the Panthers could fight for a playoff spot in 2017, but they’ll fall in a close one to start the season for the second consecutive year. Pelham 21 Homewood 28

The defending 6A state champion Ramsay Rams will visit Helena for a jamboree on Aug. 25, which should give the Huskies a good feel for what they have this season. Ramsay went 13-2 last season after beating Helena 20-10 in a jamboree to kick off 2016. Helena, on the other hand, finished the season 3-7 and missed the playoffs altogether. Ramsay loses a lot of seniors including its starting quarterback, but the Huskies are also young. Helena is pretty sound defensively and has several skill players back, but this game will depend on how Lawson Peoples will handle being the starting quarterback. It’ll be closer than last year, but Helena will fall in a tight contest. Helena 17 Ramsay 21

Before the Lions can focus on a rematch with Chelsea to start the actual season, Briarwood will square off in a jamboree with Vestavia to ease themselves into the season. It’s an interesting matchup that pits Briarwood’s stout returning defense led by Gabe Russell, Mark Hand and Carson Donnelly against a Rebels’ offense that loses a lot of starters and only scored 19.8 points per game in 2016. Vestavia’s defense should be sound as well, but Briarwood’s offense has the potential to score more throughout. The jump from 5A to 7A gives the Rebels a chance, but the Lions are slightly more talented. Briarwood 17 Vestavia 14

Just like most of the regular season matchups, Calera will have a rematch on their hands when Mae Jemison comes to town this Friday. Last season it’s a game the Eagles won with ease 25-6 and with the level of talent back on both sides of the ball they should do again this season. The offense may be more loaded this season with the return of a true No. 1 running back DeCorean Mickens and a true difference maker at quarterback in Cornelius Brown. The defense could give up a few more points in the matchup this season as they try to get guys used to their roles, but it won’t keep them from starting the season 1-0. Calera 35 Mae Jemison 14

There will be several things head coach Heath Childers is looking for when his Shelby County Wildcats play host to Childersburg this Friday night in Columbiana. First off will be his defense. Last year, Shelby County struggled with simple things such as tackling and that’s something he has put an emphasis on improving this year. Another important factor will be how explosive can his offense be with the return of two key running backs and quarterback Chadwyn Russ. The Wildcats won this game in 2016 20-12 and will look to get a momentum boost heading into this season as well. Shelby County 27 Childersburg 17

Last season, Vincent started the season with a 42-0 loss to Pleasant Valley team that finished the season 2-8. The Yellow Jackets went on to improve each week and weren’t shutout again for the remainder of the season, ending the year much better than they started. This season, both teams should be much improved and Vincent has more talent than it’s had since esteemed head coach Wiley McKeller took over the rebuilding efforts. These two teams are a combined 3-37 the last two years, meaning anything can happen. I fully expect the Yellow Jackets to keep this game much closer than a year ago, but it’s too tough to say they’ll be able to make up 42 points. Vincent 21 Pleasant Valley 28

By ALEC ETHEREDGE | Sports Editor VINCENT – We are exactly 54 days away from the 2017 high school football season... read more