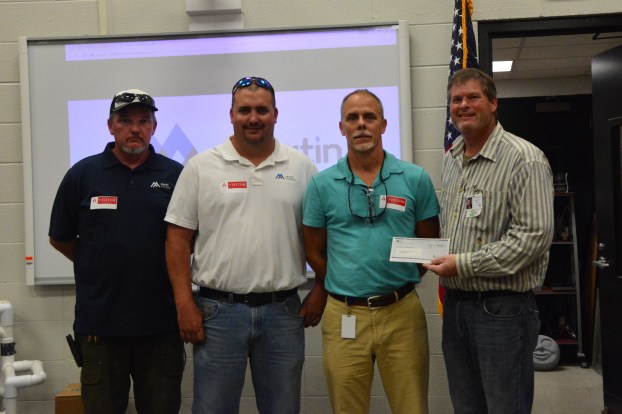 Copes said the money will be used to enable students to take on new projects under the Skilled Knowledgeable Youth program, which offers students hands-on opportunities and projects to hone their science, technology, engineering and math skills.

“It’s a small token of what we can do for the program,” Stalcup said.

Copes said the donation, in addition to sponsorship from the SKY program, had multiple benefits for his students.

In the past, Copes said the SKY program has helped his students build a full-size electric car, build an off-road basic utility vehicle and travel to Honduras to help a local school through the Sister School’s program.

According to Stalcup, Martin Marietta, a construction materials supplier, has been donating funds to the SKY program under Copes’s leadership for several years.

Stalcup said his company has been making the donations ever since he had learned about the complex engineering projects Copes and his students were working on.

“Four or five years ago, I got wind of the SKY program when Brian was at Calera High School,” Stalcup said. “After I wade the trip (to see him) and saw what those kids were learning I saw the value of helping those future leaders.”

After the donation was made, Stalcup encouraged some of Copes’s students to take pride in their work, which he said fostered critical thinking skills and mechanical knowledge.

“What you all are learning are critical skills and a trade,” Stalcup said. “You’re learning skills that you’re going to have 15 to 20 years from now.”

Stalup also encouraged students to observe all safety rules during a project and to encourage others to do the same.

“(Safety) is near and dear to us as a company,” Stalcup said. “At Martin Marietta, there’s a lot of people doing a lot of different things, and we want them to go home at the end of the day.”