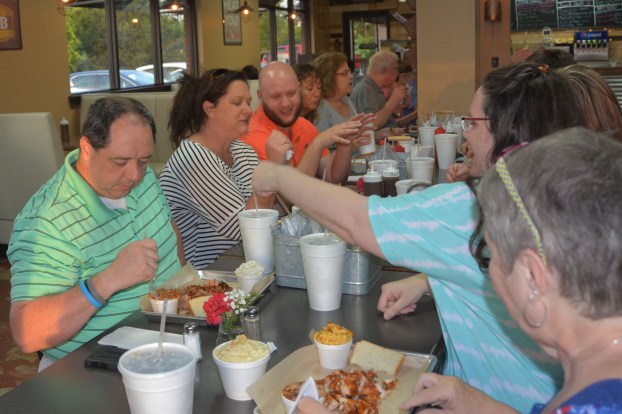 Regulars and newcomers of the Alabaster Supper Club meet up at Lazy Boy BBQ on Aug. 22. (Reporter photo/Amalia Kortright)

ALABASTER – Locals from Alabaster and nearby areas gathered at Lazy Boy BBQ to mingle and make new friends at a dinner hosted by the newly formed Alabaster Supper Club on the evening of Tuesday, Aug. 22.

Kirsten Steele said she started the group with fellow Alabaster resident Jamie Olliff to bring the community together, promote small businesses in the area, enjoy good food and combat some of the negativity she’s seen on local online pages.

“It was just a conversation (Jamie and I) had,” Steele said. “People complain all the time online about silly things, and it only takes one bad review to ruin a small business.”

“We needed to have that community feel,” Steele continued. “Through this, I’ve met some wonderful people in our community.”

For the past 10 weeks, Steele said the Alabaster Supper Club has met once every other week at a different local restaurants around Alabaster, which gives visitors the chance to try new things and meet new people.

“Some of these people don’t have anyone to go out to eat with anyone and they’re not willing to go out just by themselves, and at every restaurant we’ve been to, someone says ‘Why haven’t I been here before?” Steele said.

According to Steele, the Aug. 22 meeting attracted over 20 people, which she considers a record.

“Usually, we have regulars, but tonight we have more people than ever,” Steele said.

More information about the Alabaster Supper Club’s meet-ups is available on their Facebook page. Olliff said everyone is welcome to attend.

“Come join us and get something to eat,” Olliff said.

ALABASTER – Troopers from the Alabama Law Enforcement Agency responded to a wreck in the northbound lanes of Interstate 65... read more