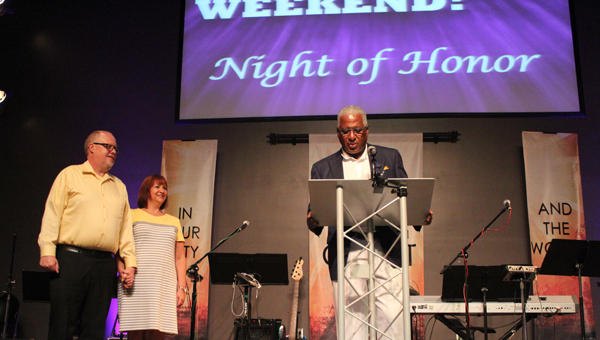 NORTH SHELBY – On Saturday night, Aug. 19, the Inverness Vineyard Church honored Founding Pastor Bubba Justice as he has completed 23 years of ministry and has taken the position of national coordinator with Vineyard USA.

Birmingham Mayor William Bell was part of the festivities as he came to read a proclamation announcing it as “Bubba Justice Day” in Birmingham.

Vineyard USA’s National Director Phil Strout shared with the crowd about Justice’s impact on world missions, especially in Kenya where he helped them form their own Association of Vineyard Churches.

The night began with a time of worship led by the IVC worship ministry. Then there were several videos from Vineyard leaders here in the United States and around the world.

Strout then shared about Justice’s world missions and each of the area pastors gave their thoughts about Justice.

Afterward, Bell came and shared his thoughts and read the proclamation.

Then Justice actually shared some short remembrances of each person who had shared.

At the end of the night, IVC’s new pastor Miguel Zayas and his wife Mai were introduced to the community.

Miguel Zayas shared a few words to greet the crowd and then had Justice and his wife Melany come pray over them and bless them as they become the new pastors (Zayas’ first official Sunday is Aug. 27).

Then all the area pastors gathered around Zayas and his wife and prayed over them. There were also groups of people that prayed for Phil and Jan Strout as representatives of Vineyard USA.

And then another group prayed for Bubba and Melany Justice as they make this transition.

Justice does not have plans to move and will continue attending IVC even though he will not be around as often due to his travel schedule.

The entire weekend was named “It’s A Bubba Weekend” and began with a catered meal and Bubba Roast on Friday night.

Several surprise guests showed up including most of the Vineyard USA office from Houston and a couple from Pennsylvania who the Justices have not seen in almost a decade.

Then on Sunday morning, VUSA’s Strout gave a stirring admonition in his sermon entitled “Day of Discovery.”

It was a historic weekend for the Inverness Vineyard Church.