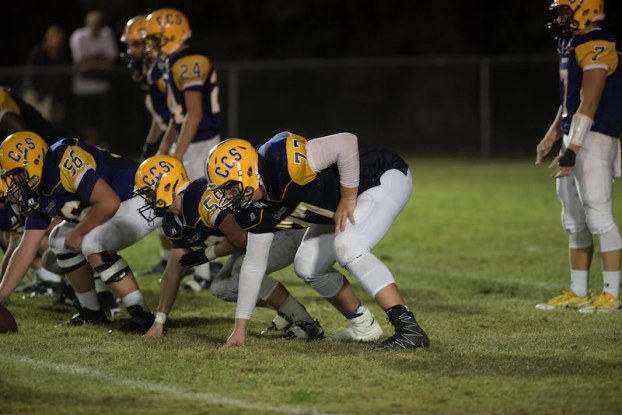 Cornerstone moved to 2-1 on the season after taking down Hope Christina 50-14 on Friday night, Sept. 1. (File)

COLUMBIANA – A matchup of two county teams took place on Friday night, Sept. 1, when the Cornerstone Christian School Chargers played host to the Hope Christian Eagles for each school’s third game of the season.

Coming into the game both team’s held records of 1-1 after strong opening-night performances on Aug. 18, but lackluster performances in week two, which seemed to set up a matchup on paper that would be closely contested, but the jump from ACSC 8-man football up to 11-man proved to be too much for the second week in a row for the Eagles as Cornerstone picked up a 50-14 win.

“They had a chip on their shoulder this week,” head coach James Lee said. “Hope isn’t a bad football team, but our guys just had a little something extra tonight. A lot didn’t give us a chance to be successful this year and we want to prove them wrong.”

A big reason for the success, particularly offensively, was due to Rhett Garrett’s handle on the Chargers’ new spread style offensive attack or the 2017 season. Garrett finished the night 10-of-19 for 323 yards and six touchdowns.

Through three games, Garrett has already thrown for right at 1,000 yards and is already 500 yards of breaking the school-record for passing yards.

“He’s just turned into such a great quarterback and has to be the player of the week,” Lee said bragging about Garrett’s playmaking ability. “He had some guys that were catching everything thrown their way, but he’s also just really worked hard and studied this spread offense we are running.”

“He actually saw things out there that I didn’t even see and I trusted him to make calls some calls. I think he could be the best quarterback we’ve had here in a long time.”

Ben Perryman was Garrett’s biggest threat in the passing game as he caught just three balls, but totaled 171 yards and two touchdowns making the most of those three catches.

Jake Blankenship was another consistent receiving option for Garrett as he added five receptions for 116 yards and three touchdowns on the night. He also added a 42-yard punt return for a touchdown to give him four on the night.

Defensively was where the biggest improvement was seen from last week’s matchup with Bessemer Academy and Blankenship led the way there as well with 12 tackles and three sacks. Tanner Falkner also added nine more tackles.

“We played a lot better on defense this week,” Lee said. “Last week could’ve been a different ball game had we played the way we did tonight. The execution tonight was just so much better than last week.”

As a team, Cornerstone rushed for 110 yards in addition to their strong night passing. Patrick Howell led the way with 50 yards and also added seven tackles on defense.

Next week they get the Lakeside Chiefs, who have dropped their first two games 26-20 and 44-19.

“Lakeside is a very good football team with a great quarterback back so it’s going to take a total team effort, but we can put up a lot of points fast and that’s got us really excited,” Lee said.