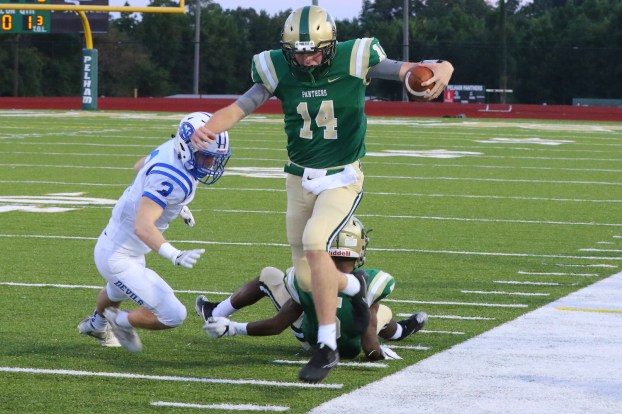 While three interceptions were crucial, Pelham’s Matthew Rye had a strong game running the ball for Pelham in the loss to Benjamin Russell and is showing progression. (File)

ALEXANDER CITY – Three weeks into the 2017 high school football season and Pelham already has two heartbreaking seven-point losses to its name. The first of which came on opening night against Homewood 29-22 and the most recent of which came at Benjamin Russell 35-28 on Sept. 8.

While head coach Tom Causey will tell you non-stop how they aren’t playing for moral victories and the fact they should be 3-0 means nothing without the wins actually taking place, this team has shown so much improvement for a team that is still relatively young with a lack of senior leadership.

In their opening game with Homewood, the Panthers lost when Homewood scored a go-ahead touchdown with 40 seconds left. In their most recent matchup, also their first region game of the season, Pelham fell in the final two minutes again when Benjamin Russell picked up a 31-yard rushing touchdown with 1:57 remaining to pull off the win.

The game started about as expected with Pelham bringing a strong defense to the table. They held the Wildcats scoreless for a long chunk of the first quarter, but with 19.8 seconds to play, Benjamin Russell was able to put together a scoring drive that was capped off by a 7-yard rushing touchdown for a 7-0 lead.

Pelham’s offense, which has started slow in games this year, did so again as the Wildcats added to their lead on a 40-yard pick six 40 seconds after their touchdown to take a 14-0 lead with 11:39 remaining until the half.

Pelham, unlike last year, didn’t fold and battled back similar to the way they did against the Patriots in game one. They put together a nice 4:24 drive that ended with a 20-yard rushing touchdown from quarterback Matthew Rye to cut the Wildcat lead to 14-7.

Benjamin Russell was able to answer back very quickly with a drive that last just under three minutes and saw a 3-yard touchdown run extend the lead back to 14 at 21-7.

In a game that all of a sudden had turned into a back-and-forth marathon, the Panthers answered back just over two minutes later with a quick drive of their own that ended with another Rye touchdown from 4 yards out.

Going into the half, Pelham had grabbed some momentum offensively scoring twice in 7:15 of the second quarter and cutting the lead to 21-14.

That momentum didn’t escape them during the halftime brake as they came out and tied things up midway through the fourth quarter when Brandon Sledge capped off a long drive with his seventh touchdown of the year from three yards out.

The two battled to a 21-21 tie at the end of three quarters setting up an entertaining fourth quarter to determine the winner.

While it seemed as if the Panthers had gained all of the momentum, Benjamin Russell wasn’t ready to fold. Early in the fourth quarter, the Wildcats were able to connect on a 71-yard touchdown pass that put them back on top 28-21 with 11:45 to play.

It took a while for Pelham to answer and started to look like it may be Benjamin Russell’s game for the taking, but with 5:08 to play, Rye found Casey Clark for a 40-yard touchdown pass to tie the game in the clutch.

Unfortunately, while they came close to hanging on to force overtime, Pelham gave up the 31-yard rushing touchdown late to end their chances after another hard-fought game.

Rye ended the night 8-13 through the air for 96 yards, but also tossed three interceptions. His ground game was much more sound running 14 times for 92 yards and two touchdowns.

Nic Blackburn was just behind Rye on the ground with 12 attempts for 74 yards and Sledge added eight attempts for 30 yards and a touchdown. Sledge also had four receptions for 61 yards.

Pelham is now 1-2 (0-1) with a big game against Helena coming on Sept. 15, which was one of their two wins a season ago. The Huskies will bring a 1-1 (1-0) record into the game, making it an important early-season region game for the two teams.