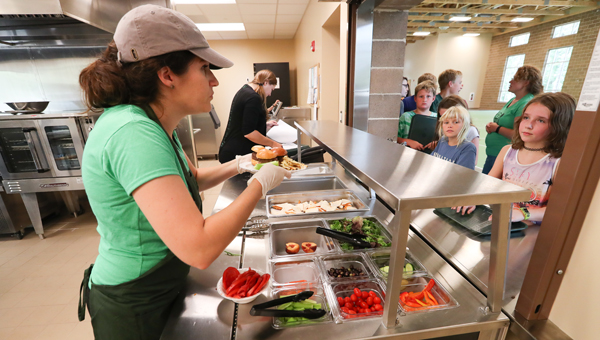 The addition of a kitchen at the school that is part of a new multi-use facility that opened with the current school year has allowed the school to create a meal program focused on nutrition, freshness and sustainability, Head of School Michele Wilensky said.

“We want to change how people think about kids eating,” Wilensky said.

Before the kitchen opened, Hilltop purchased meals from Christian Catering based at Our Lady of the Valley Catholic Church.

Hilltop was committed to fresh, healthy meals for its students even before the kitchen opened.

A gardening program was begun about 10 years ago, with fruits and vegetables used to supplement snacks.

“We found it made a real difference and wanted to take it to the next level,” Wilensky said.

To celebrate the opening of the kitchen, a “Farm to Fork” logo created by parent April Marz was emblazoned on T-shirts worn by faculty members.

Hilltop invested about $120,000 in the kitchen, which was named after Richard Grandey.

While about half of Hilltop’s 200-plus students purchased school meals previously, the number has climbed to about three-fourths of the students with the opening of the kitchen, Wilensky said.

The program will allow for more choices to appeal to more students.

“We want them to actually eat it,” Wilensky said.

Parents pay for meals through an online system.