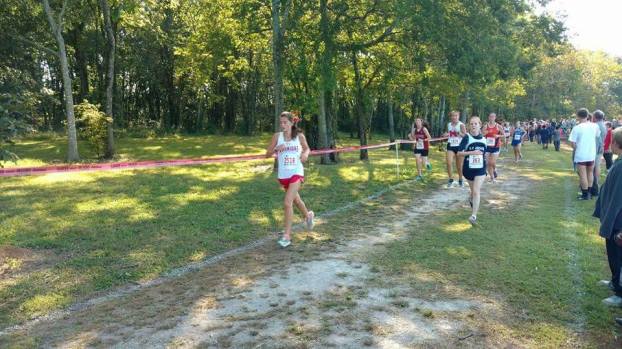 Seven boys teams and three girls teams competed in the Chickasaw Trails Invitational, which was the first cross country event of the season for many. Thompson had the highest individual finisher in the county from both the boys and girls race. (Contributed)

OAKVILLE – The first major cross country event of the 2017 season is in the books after seven teams from Shelby County traveled to Oakville to take part in the Chickasaw Trails Invitation featuring hundreds of the best runners from around the southeast.

It’s expected to be a strong year for several teams and individual runners and in the first event of the season, they did not disappoint with several living up to the hype.

Individually, two Thompson Warriors were the highlight as the top two finishers of all runners from Shelby County.

It started on the girls’ side with McKenzie Hogue, who finished in solo third behind Meredith Helton of Brentwood Academy and Mary Claire Ridgeway of Florence High School.

Brandon DeMarcus Lee, who is considered one of the best runners in the state, is coming off a strong year for the Warriors’ boys team and picked up right where he left off by taking home a seventh-place finish in Oakville.

Lee finished in 16:05.82, which was just a hair off the winning time of 15:36.93, as the top 7 runners were only separated by a few seconds. It’s a strong start to Lee’s 2017 campaign as he looks for an individual championship.

The Jags had a total score of 236 points, with Huntsville winning the title thanks to a total score of 90 points. Brentwood Academy, St. Pius, Vestavia, Mountain Brook and Smiths Station all finished in front of the Jaguars.

Oak Mountain was led by Bryce Keefover and Jonah Barrett, who finished 36th and 39th, respectively. Pelham was led by Adam Keller with a time of 16:37.31, which was good enough for 28th.

In the girls’ race, Evie Bell of Oak Mountain was the second highest finisher in the county behind Hogue finishing in 18th with a time of 19:51.28. Her top 20 finish helped the Eagles to their ninth place finish.

Thompson’s girls took home 17th in the competition led by Hogue, while Pelham finished in 23rd.

The Panthers were led by their best runner in Katie Strozier, who finished 24th with a time of 20:06.32.

In the B team races, Westminster at Oak Mountain’s girls and boys also got into the mix with strong showings.

Hallie Porterfield a freshman on the Lady Knights’ team took home first place in the girls B team race with a time of 20:14.11. Rachel Faulk finished 10 spots down the standings in 11th. Those two helped lead Westminster’s girls to a ninth place finish in the overall standings.

Westminster’s boys finished in 17th overall as they put up their varsity team against 7A B teams. Freshman Hunter Wright paced the Knights with a time of 16:52.89, which placed him in second overall. John Porterfield also had a nice showing, running the race in 17:58.48 to finish in 17th.

Westminster XC has loaded rosters for 2017