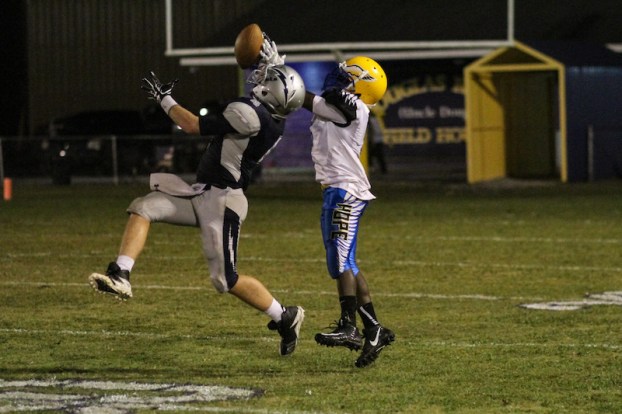 Kamden Smith goes up for the one handed catch against the Hope defender. Smith led the team with 65 yards receiving on the night. (For the Reporter/Twanna Arnold)

“It was one of the biggest crowds I have ever seen at that stadium, and I’ve seen them all,” said Evangel head coach Tim Smith, who served as Cornerstone’s only coach the previous 19 years. “It was exciting. The kids who have been at Evangel for a long time were excited. This is why I love coaching high school football. I told them before the game, ‘they’re going to give us their best shot,’ and they came to play.”

Evangel’s defense took a 9-0 lead with a safety and fumble recovery for a touchdown by Luke Sanders. Carter Hand had the point after touchdown kick.

Hope got on the board with a 97-yard touchdown pass from Jackson Davis to Tyler Hubbard on third-and-15. The 2-point conversion was good to pull the Hope Eagles within a point, 9-8.

Kamden Smith answered for the Lightning with a 25-yard pass to Coleby Henderson to keep Evangel in front, 15-8.

Tyler Henderson stretched the lead to 22-8 at the half with his first of three touchdown passes before halftime.

Evangel drove down field to open the third quarter and scored on a 22-yard touchdown run by Will Ferrell and added another pass from Tyler Henderson to Smith from 28 yards out. Henderson finished the night with 136 yards on 8-of-15 passing.

Kamden Smith, Luke Sanders and Coleby Henderson were the top receiving targets with 65, 63 and 52 yards respectively, on three catches each.

Chase Callahan, who led the Lightning’s ground game with 17 carries for 98 yards, scored Evangel’s final touchdown from 18 yards in the fourth quarter to lead, 43-8.

“We’re getting better but we still have some work to do. Offensively we’re still struggling a little but got it going pretty good in the second half,” Smith said.

Theo Mangos led Evangel with nine tackles, including six in the first quarter. John Lloyd had 7.5 tackles and two sacks, while Davis Winsor, Nate Arvizu and Cooper Dowell each had five tackles and a sack. Hunter Green had four tackles and a fumble recovery. Dowell also had a forced fumble.

The win was No. 90 in Smith’s 20-year career as a high school football coach with 45 now from the home sideline of Willis Field, where Smith compiled an 87-91 record as Cornerstone’s head coach.

“When I walked up, there was a little twinge but once I got on the sideline it was just coaching football. It was the same grass I walked on for 19 years and it felt comfortable,” Smith said. “We appreciate Cornerstone. They let us use their field, field house and facilities. When we built that place 20 years ago we always said we want people to be able to use it, and they’re still doing it.”

The game was only the third time in Sky Bowl history that both schools had a new head coach. Smith became the fifth coach to win the rivalry game in their first season as head coach of their team, joining Wayne Price (Evangel, 2009), Del Clayton (Evangel, 2011), the late Tony Nafe (Hope, 2012) and Don Murphy (Evangel, 2014).

Wildcats respond with region win over Moody in OT