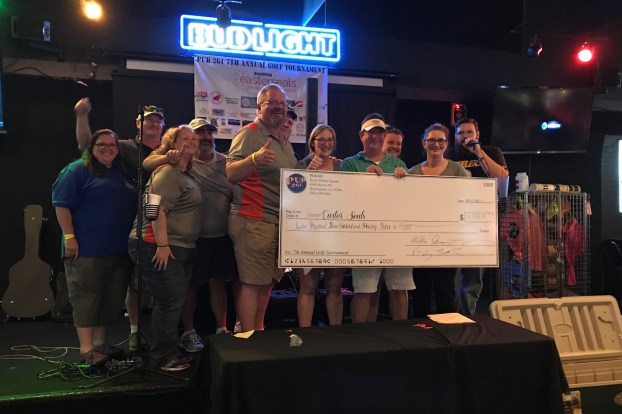 Through its annual golf tournament, PUB 261 of Pelham raised $12,333.10 for the Easter Seals Pediatric Clinic, also located in Pelham. (Contributed)

PELHAM – Mike Sarvaunt and Keyvan Solemani, owners of PUB 261 of Pelham, raised almost $13,000 for the Easter Seals of the Birmingham Area Pediatric Clinic through its annual golf tournament at the Roebuck Municipal Golf Course on Sunday, Sept. 17. According to Sarvaunt, this is the seventh year that Pub 261 has hosted its golf tournament.

Sarvaunt said this is also the first year that PUB 261 has raised money for the Easter Seals Pediatric Clinic. Sarvaunt said Pub 261 chose to donate to Easter Seals after they saw the impact the clinic made on people they knew.

“We have a guy that plays in our tournament every year. His child has received help from Easter Seals,” Sarvaunt said. “He’s always supported the tournaments every year. Why not help them out since they have helped us out so much?”

Birmingham Area Easter Seals Executive Director David Higgins thanked PUB 261 owners, staff, patrons and sponsors for raising the money. Higgins said the Easter Seals Pediatric Clinic specializes in providing speech, occupational and physical therapy to children from birth through 21, regardless of whether they can pay, and the money will allow them to serve more children.

“You don’t see that kind of generosity and outpouring of love often,” Higgins said.