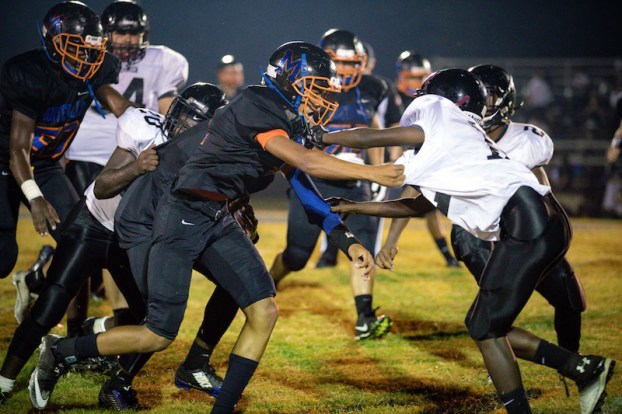 Montevallo falls in overtime at Midfield

MIDFIELD – Montevallo’s road woes continued Friday, Sept. 22, falling in overtime at Midfield, 42-34. After Montevallo built its lead to 34-26 in the third quarter, the Patriots scored in the final seconds of regulation and went for 2 to tie it at 34 before winning in overtime.

“If you want to be a team that competes for championships and put yourself in position to make a run you’ve got to win on the road. We knew this was a big game and knew it was a game we needed to win to put ourselves in a good position but unfortunately the ball literally didn’t bounce our way a few times,” said Brandon Wilcox, Montevallo’s head coach. “I was proud of our guys for showing some resiliency. There were times in the game you could tell the momentum was starting to shift and we found a way to get it back … Hats off to midfield. They’re a good football team, and tonight they were the better team.”

Jay Sullens was responsible for all five of Montevallo’s touchdowns and accounted for 259 yards of offense. Sullens threw for 110 yards on 12-of-20 passing and two touchdowns to Tavarius Holman. He also rushed 18 times for 149 yards and three touchdowns.

Demetrius Smith led the Bulldogs’ defense with 16 tackles, while Will Howell had 11 tackles and interception. Avery Anfield had nine tackles and an interception, which he returned 77 yards to give Montevallo good field position.

Wilcox said he is interested to see how his team responds to the loss.

Montevallo will return home next week to host Bibb County (4-1).

By Chris Megginson | For the Reporter COLUMBIANA – Evangel Christian dropped a home game at the Columbiana Sports Complex... read more