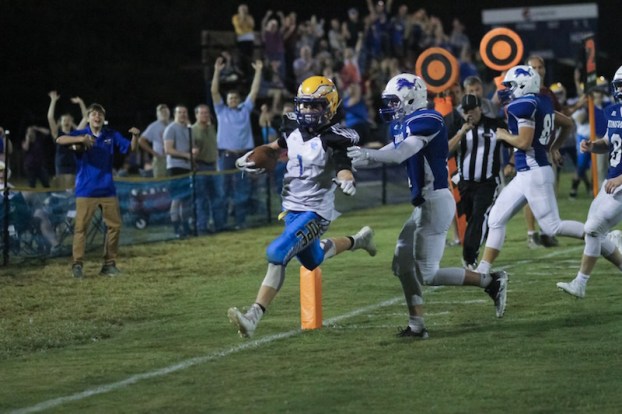 Tyler Hubbard runs in the go-ahead touchdown to give Hope a 28-24 win over county foe Kingwood on Friday, Sept. 29. (For the Reporter/Twanna Arnold)

Hope rallies at Kingwood for first 11-man win of season

ALABASTER – Trailing by two with four minutes to play, the Hope Christian Eagles marched down the field to score the go-ahead touchdown with 28 seconds remaining to defeat the Kingwood Christian Lions, 28-24, in the Eagles’ first 11-man football win of the season.

“It feels great. We’ve had a hard time this season going back and forth between 8-man and 11-man,” said Matt Davis, Hope’s head coach. “I thought our team really came together as a team tonight and played with a lot of heart.”

Senior Tyler Hubbard, playing as the backup quarterback, ran in the go-ahead touchdown and came up with a game-ending tackle on the Eagles’ 25 to secure the win. He finished with 64 yards and seven tackles in Hope’s first 11-man football win of the season

Hope Christian took an early 6-0 lead with a rushing touchdown by Peyton Long and then forced a Kingwood fumble on the Lions’ first possession, but Kingwood fought back. The Lions got on the board with a touchdown and 2-point conversion to go up 8-6. KCS struck again on a fake punt, as Garrett Picklesimer found Tony Ruiz for a touchdown, followed by a Tyler West 2-point run, to make it 16-6 entering halftime.

Hope responded to Kingwood’s 16-straight points with 16 unanswered points of its own with touchdown runs by Long and Jackson Davis to go up 22-6. Long, who also had a 2-point conversion, led the Eagles’ rushing attack with 139 yards. Davis added 49 yards on the ground and 40 by air on 6-of-13 passing.

“When we got down, I had full confidence in our offense,” Davis said. “Once we got our rhythm going and got everything working the way we knew it could work, I knew we could sustain some drives. Knowing that we were going to be able to control the ball I felt we were still in the driver’s seat.”

With 5:45 to play in the game, Kingwood found the end zone again, as West scored to tie the game, 22-22, and added a 2-point run for a 24-22 lead. KCS recovered a pooch kick, but was unable to take advantage of its field position, giving the ball back to Hope with three minutes to play.

Long and Hubbard milked the clock to set up the go-ahead touchdown run with 28 seconds to play.

Davis said the fourth quarter rally was a team effort with several starters knocked out the game due to injury and backups filling in holes.

“I was very proud of the way our guys stepped up and filled into roles they weren’t use to playing,” he said.

The loss drops Kingwood to 1-5 on the season.

“Not taking anything away from Hope, because they fought their tails off, but we had a lot of mental mistakes, miscues and missed tackles. We just couldn’t stop them on defense,” said KCS head coach Todd Bradford. “Even though we had the lead, I felt like Hope had the upper hand. We were fighting and clawing the whole time.”

Hope (3-3, 1-1 ACSC) will return to 8-man action next week to host Ezekiel Academy at Kingwood’s field, while Kingwood will travel to the other side of the county to play Coosa Valley Academy in an AISA 2A, Region 1 matchup.

By Chris Megginson | For the Reporter COLUMBIANA – For the second time in three weeks Evangel Christian School played... read more