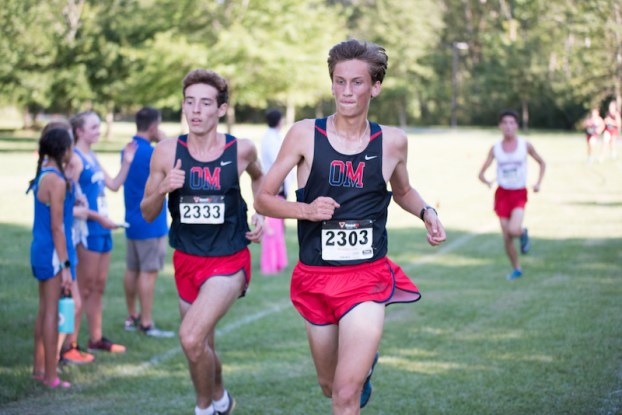 The Oak Mountain Eagles’ boys cross country team finished in second at their own event on Saturday, Sept. 30, as they were just three points behind the Hoover Bucs. (Reporter photo/Keith McCoy)

NORTH SHELBY – Both Oak Mountain’s boys and girls cross country teams finished second behind Hoover at their own event, the Oak Mountain Invitational, which was held at Heardmont Park on Saturday, Sept. 30.

The boys race was very tightly contested as the Hoover boys team put 50 points on the board, while the Eagles were just three points lower with 53 points.

Junior Jonah Barrett paced the Eagles with a time of 16:58.18, which was good enough for fourth at the event. The time was just seven seconds off his best recorded time according to Alabamarunners.com, which came in the first event of the season at the Chickasaw Trails Invitational, where he finished in 16:51.84.

Hansen McCown, also a junior, was the next highest finisher for Oak Mountain, finishing four spots lower than his teammate in eighth with a time of 17:08.67.

Those were the only two top 10 finishers for the Eagles, but Walker Cole, Eric Marin and Bryce Keefover, all finished inside the top 20 within five spots of each other.

Keefover finished three positions lower than Marin in 16th with a time of 17:31.03.

Other county teams competing in the event were Helena, Westminster at Oak Mountain, Pelham and Indian Springs.

The Huskies were the next highest finisher when it came to the overall team standings, finishing in fourth thanks to 141 points.

As usual, Helena was led by senior Blake Vaughn, who picked up his second top 10 finish of the year having competed in just three events by taking home third in the race.

Freshman Brady Barton, who has also had a nice start to the season, wasn’t too far behind Vaughn, finishing in 21st with a time of 17:49.35, which according to Alabamarunners.com is his second fastest time.

Spencer Hodges finished in 27th with a time of 17:57.79, while sophomores Talon Pritchard and Blake Childers finished in 40th and 46th, respectively, to give the Huskies five runners in the top 50.

Westminster at Oak Mountain finished seventh in the team standings, led by freshman phenome Hunter Wright. Wright, who already has a finish of second this season at the Chickasaw Trails Invitational, where he ran a personal best 16:52.89, finished in 17th with a time of 17:35.10.

Indian Springs also competed and was led by sophomore Miles Robinson, who finished in 125th with a time of 21:31.52.