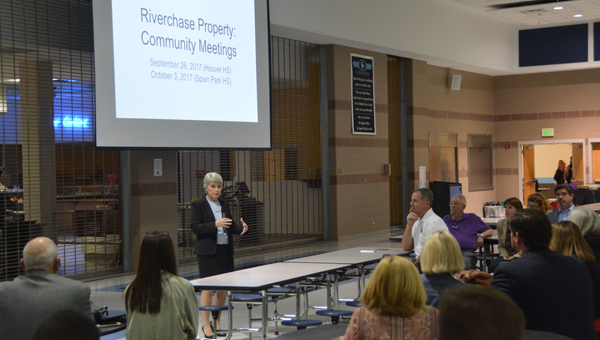 HOOVER – The former Riverchase Middle School property purchased by Hoover City Schools will be used for a career training center, residents learned at a public input meeting on Tuesday, Oct. 3.

Those in attendance seemed to support the idea but did voice concerns, including about the possibility of existing academies being moved.

The 91,000-square-foot building and 41 acres of land was purchased from Pelham City Schools for about $4.25 million, HCS Superintendent Kathy Murphy said at the meeting, comparing the price to the $11 million the school system received for the former Berry High School property, which she needed about $2 million in renovations to bring it up to the system’s standards.

The Riverchase property will not serve as a fine arts center or a new home for the school system’s program for at-risk students, Murphy said, but it could help alleviate overcrowding, particularly at Hoover High School, by pulling students off high school campuses for blocks of time during the day.

Ron Dodson, HCS assistant superintendent for instruction, said the center could be part of the solution for two problems facing the school system: population growth and a curriculum gap in training for skilled trades.

“We need a solution for our high schools,” Dodson said.

The share of the job market for those equipped with trade skills has grown from 20 percent in 1960 to 57 percent, but Hoover’s high schools were not built with occupational training in mind, Dodson said and then presented general guidelines for the operation of a planned Riverchase Center for Career Training.

Students from HHS and Spain Park would attend the center for half-day shifts. The format would simulate a workplace, including the absence of bells and students being required to “call in” if they are unable to attend, instead of bringing a doctor’s note the next day.

Potential programs that could be housed at the center include those focusing on construction, computer science, cosmetology, culinary arts/hospitality, emergency response, JROTC and more.

Students would still be able to participate in extracurricular activities such as sports and band.

Several “industry partners” addressed those in attendance about why a career training center would be beneficial. Those who spoke were from the construction, information technology and manufacturing industries. Hoover Fire Department Chief Clay Bentley and representatives of the U.S. Army also spoke.

“We think this is an awesome opportunity for us,” said, who added that he helped start a similar program in Chilton County.

When the program was opened up to comments from attendees, parents of high school students expressed concern about difficulties caused by the time required to transport students from their high school campuses to the career training center and existing programs being moved and merged with those from other schools.

Officials said there is no plan to move existing programs.

“We’re going to take our time with this and get it right,” Dodson said.