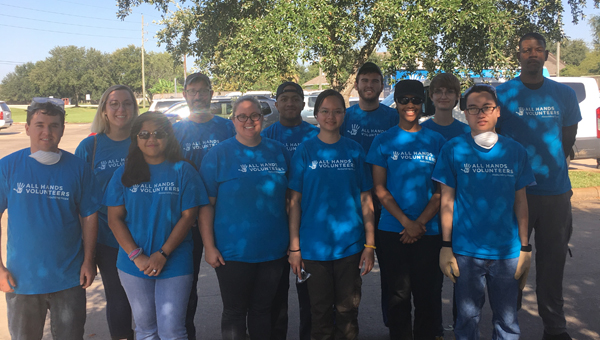 Students and advisors with the Phi Theta Kappa chapter at Jefferson State Community College traveled to Houston to help with hurricane relief. (CONTRIBUTED)

Hurricane victims in Houston are still in need, and students from Jefferson State Community College are on their way to help.

“We’ll be getting mud and debris out of houses so that people can rebuild,” Harris said. “It’s going to be hard work, but we’re just excited about being able to pitch in.”

Two vans carried the students to Houston, along with Harris and fellow advisor Matt Boehm.

The party is working through the All Hands Volunteers organization and will be housed by three different host families.

The students will miss three days of classes, but student Levi Springer said professors have been willing to work with them to be able to complete necessary work beforehand or make it up when they return.

“My initial thought was I had a statistics class I couldn’t miss, but [professors] have been understanding,” Springer said. “I think that in the long run it will be worth it.”

The idea was formed at PTK’s annual statewide retreat, which was held at the 4-H Center in Columbiana.

“It was life-changing for the students, so I thought, ‘Let’s do it again,’” she said.

A former PTK advisor at Jeff State, Kristi Chambers, now lives in the area affected by the hurricane and has helped coordinate the effort.

“All of the people we’re coordinating with are really excited, and everyone is pitching in to make it happen,” Harris said.

Student Nicholas Elacqua said he performed cleanup after the tornado that struck Clay in 2012 and is looking forward to another opportunity to help.

“If I can have the smallest impact on someone, that’s definitely what I’m going to do,” Elacqua said.

Comments from other students included:

-“I have always seen the damage on TV, but being able to come to Houston and help the victims has really shown how traumatizing these disasters are,” Muhammad said.

-“I came into this project knowing we would be working our tails off, but this is truly the most challenging work I have ever done. It is beyond rewarding,” Ayers said.

-“I think the biggest thing I have realized on this trip is that they need volunteers now more than ever,” Broome said. “There is a lot of help when the disaster first happens, but then people go back to regular life.”

-“Many people are living in their homes, going to work and living out their lives like normal, and that makes it seem like things are not so bad,” Doyle said. “But if you look around, there are strips of houses with no cars in the driveways because the houses are not fit to live in.”

-“When I go back home it makes me really appreciate things that much more seeing these people here losing their house and precious things,” Boyette said.

-“This has been a wonderful and very humbling experience to me and everybody in the group,” Bangoy said.