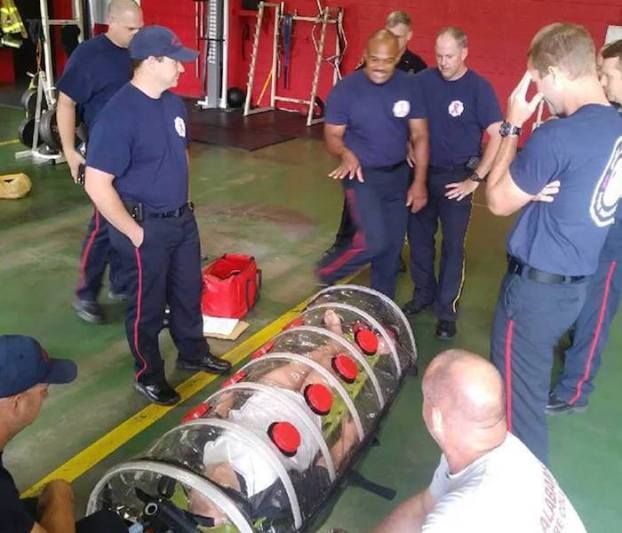 FPD firefighters and medics practice transporting an infected patient via an isolation pod at a session of their infectious disease training on Oct. 2 (Contributed)

PELHAM – Throughout the week of Oct. 2, firefighters and medics at the Pelham Fire Department went through infectious disease training. According to PFD Station Two Captain and Assistant Training Officer Everett Hazen, one PFD shift took a class on different infectious diseases and how to respond to them during two sessions on Monday, Oct. 2 and Thursday, Oct. 5.

“We’ve already trained for some infectious diseases, but this is more in-depth,” Hazen said.

“One thing we’ve learned is that there was an Ebola outbreak in Texas, and some nurses ended up getting infected,” Hazen said. “I don’t think that they had this kind of training.”

Hazen said the most important thing about handling an infectious disease is recognizing the signs and symptoms before it is too late.

“The problem with recognizing Ebola is that the signs and symptoms are just like the common cold,” Hazen said.

Hayes said the training will help the PFD have a better understanding of how to act if a Pelham resident were to become infected.

“It will prevent an isolated incident from becoming and epidemic or a pandemic,” Hayes said.

PELHAM – Dogs and dog lovers throughout the county had the opportunity to get their paws wet at the Pelham... read more