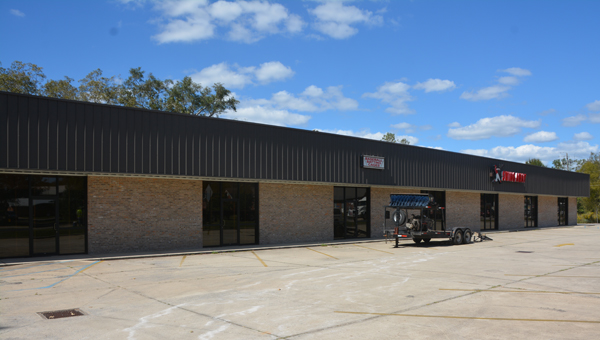 Harpersville has purchased a strip mall building with plans for it to serve as space for the town’s library as well as a new community center, senior center and storm shelter. (REPORTER PHOTO/STEPHEN DAWKINS)

HARPERSVILLE – Harpersville has purchased property that soon will become a community center, library, senior center and storm shelter for the town.

Funds from the purchase were from a bond issue the town secured for a community/senior center.

After several years of studying building a new facility, the option to purchase the existing building arose, Greene said.

The cost of building a 3,600-square-foot facility would have been about the same as purchasing and renovating the much larger space, Greene said, in part because a parking lot is already in place.

“It wouldn’t have been very feasible,” he said about plans for a smaller building. “The timing was just right for us to buy this building.”

The property purchased by the town has housed an indoor baseball/softball operation that has been closed for a couple of years, a pharmacy that closed more recently and storage space for a Harpersville business.

The former pharmacy will likely serve as space for the town’s library, while the large former sports practice space will likely be divided to serve other town needs.

The development was built about 12 years ago and was evaluated by Shelby County Development Services before the town closed on the purchase in September, Greene said.

The next step in the process will be to contract for preliminary architectural drawings, as the Town Council is still weighing options for the facility.

Greene said the idea would be for the community center to serve as space residents could rent for birthday parties, weddings and other events, as well as being used for town functions such as the annual Harpersville Day.

It could move in to its new home before the other elements open because the former pharmacy space would require less renovation, Greene said.

Town officials hope for the library, community center, senior center and storm shelter to be open in 2018.

“There’s a lot of work to be done,” Greene said.