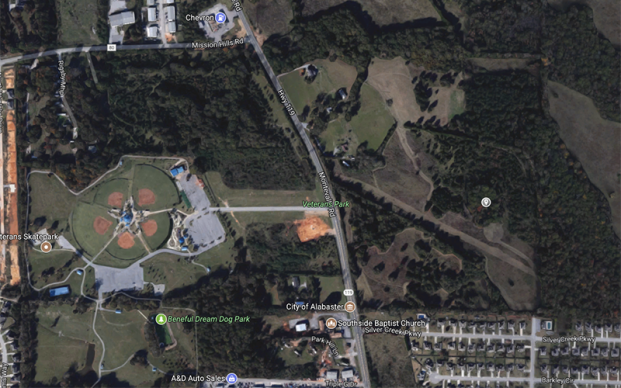 The Alabaster City Council may approve a land swap during its Oct. 23 meeting, trading property off Old Highway 31 for about 65 acres across Alabama 119 from Veterans Park. (Contributed)

Alabaster may get 65 acres near Veterans Park

ALABASTER – Alabaster City Council members likely will decide during an Oct. 23 meeting if they will move forward with a land swap giving about 65 city-owned acres off Old Highway 31 in exchange for 65 acres across Alabama 119 from Veterans Park.

Council members heard from the parties interested in completing the swap during a work session before their Oct. 9 meeting, and said they would consider the matter over the next few weeks.

Alabaster currently owns the land off Old Highway 31, which it purchased several years ago with the intention of developing a new municipal complex and city center.

Because of the rocky, hilly terrain on the land off Old Highway 31, the cost to develop the property has prevented the city from moving forward with developing it, said Alabaster Mayor Marty Handlon.

If the swap moves forward, the city will trade the property off Old Highway 31 with about 65 acres across Alabama 119 from Veterans Park. The flat, currently undeveloped land off Alabama 119 would give the city future options for possible development or expansion of the park, said City Manager Brian Binzer.

“We don’t necessarily have a plan for it right now,” Binzer said. “The vast majority of that property looks to be good from a development standpoint.”

Real estate agent Eddie Williams, who attended the work session representing the Alabama 119 property owners, said his clients are interested in acquiring the land off Old Highway 31 to use as investment property.

If the swap is completed, the new owners of the Old Highway 31 property would allow investors to decide if they will develop the property, hold it or turn it into a conservation easement. If the land is turned into a conservation easement, it could never be developed, but could be turned into a park with walking trails, and could be used by the owners as a tax write-off.

The new owners also would agree to donate several acres back to the city to allow for any future developments in the area.

“We have no hidden agenda,” Williams said. “If this works for y’all, it works for us.”

The Oct. 23 meeting will begin at 7 p.m. in the council chambers at Alabaster City Hall.