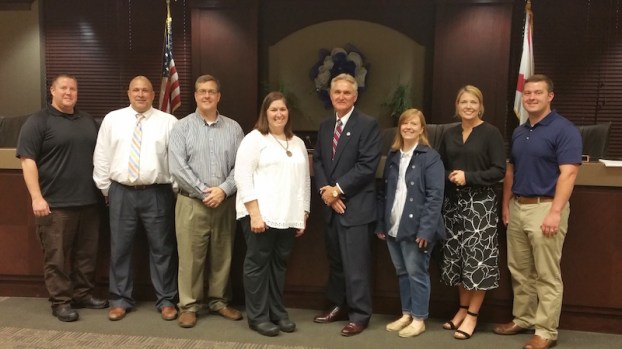 The Chelsea City Council is joined by Anna Burton (fifth from right) and Kelly Rice (third from right) of the Laura Crandall Brown Foundation for Mayor Picklesimer’s proclamation of September 2017, as Gynecologic Cancer Awareness Month throughout the city. (Contributed)

“Alabama is consistently in the top five states with the highest mortality rates from ovarian cancer and cervical cancer,” said Kelly Rice, chairperson for the Laura Crandall Brown Foundation, an organization fighting gyn cancer throughout Alabama. “Our mission is three-fold: We fund research to help find an early detection test for ovarian cancer; we educate communities and individuals through awareness and speaking events; and we have a gyn cancer patient support group called CanSurvive.”

Rice recently spoke at the Chelsea City Council Meeting about their mission to bring hope and awareness to Alabama throughout the city.

“Cervical cancer is 100-percent curable if treated early and is over 90-percent preventable when vaccinated against HPV, which causes most cervical cancer,” she said.

“Currently, there is no test available for ovarian cancer,” Rice added, “And there is only a screening test for one of the five gyn cancers.”

Thus, the need for funding research and driving awareness.

“Education and knowledge of the signs and symptoms of gyn cancers is key to alerting women when to seek medical attention. The earlier a woman is diagnosed and treated, the more likely her long-term survival.”

Rice has a personal connection to her work as well.

“I was diagnosed with ovarian cancer in 2001,” Rice said. “I became involved with the CanSurvive support group in 2009. Just a few months ago, a good friend passed away right before Mother’s Day. She had two young children. Our stories were so similar except that my cancer was found early and hers was not.”

To help drive awareness in Chelsea, Picklesimer has proclaimed September 2017 as Gynecologic Cancer Awareness Month throughout the city “to encourage all residents of Chelsea to work together to raise awareness of GYN cancers.”

Last year, the foundation reached over 8,000 people with their awareness message.

This year they hope to reach all Chelsea ladies through the mayor’s proclamation, speaking and the lighting of community buildings in teal, the awareness color for the foundation.

One of Rice’s favorite memories from her work with the foundation concerns the state capital and lighting it teal for the cause.

“My favorite memory is the first year we started the ‘A State of Teal’ initiative,” she says. “We lit the Capitol in Montgomery teal and had a big celebration event. The First Lady came and spoke at our event as well as other gyn cancer groups from around the state. It happened to be on my birthday!”

So be aware and share why Chelsea community buildings are lit in teal this September, and for more information or to become involved, visit their website: AStateOfTeal.org.

By TONY NIVENS / Community Columnist   “We were stationed in Tallahassee, Florida when my husband called and said, ‘Are you... read more