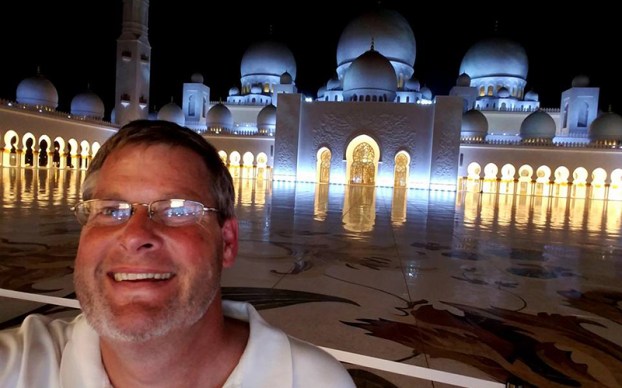 ALABASTER – Thompson High School engineering teacher Brian Copes has already had an international impact during his time in education over the years, as he and his students have completed projects ranging from building basic utility vehicles to low-cost prosthetic limbs for those in need in Central America.

In early October, Copes’ efforts landed him on the international stage again.

From Oct. 7-8, Copes was one of about 800 teachers representing 70 countries to attend the 2017 Qudwa Teaching for Tomorrow Global Teachers’ Forum, which was sponsored in Abu Dhabi by the city’s Crown Prince and Deputy Supreme Commander of the United Arab Emirates’ Armed Forces Sheikh Mohamed bin Zayed Al Nahyan.

Copes was one of 90 Varkey Foundation teacher ambassadors selected to attend the conference from across the nation, thanks to him placing in the top 50 of the Global Teacher Prize competition last year.

While in Abu Dhabi, Copes was able to share his ideas and learn from other educators about what lies ahead for global education.

“The major focus was looking toward the future of education,” Copes said during an Oct. 12 interview. “Oxford University did a study that found in the next 20 years, 40 percent of all current jobs will be automated, but we will also have more jobs created that we don’t even know about now. A lot of the conference focused on how we prepare kids for their future careers.”

Copes said the conference empowered him to think about the upcoming changes teachers will see in the classroom as the world becomes more reliant on technology.

“As I reflect on my educational career, I think of the first computer I had in my classroom and remember that world travel wasn’t easy back then,” Copes said. “I’m sure most of the teacher leaders and administrators had a similar experience. Because of their background, they still don’t have a full grasp of world culture and how technology is impacting the classroom.

“While I was there, it really opened up my eyes to the possibilities that are out there,” Copes said. “I enjoyed being immersed in the culture. The people there are very kind and polite people.”

After returning from Abu Dhabi, Copes only had plans to remain in the United States for a few days before heading to another prestigious international education conference.

On Oct. 15, Copes will head to the OECD conference in Paris to join a small group of teachers from multiple countries as they share lesson plans with an international audience of their peers. OECD conducts the Programme for International Student Assessment each year, which ranks countries’ education systems.

“I’ve really been enjoying it, and I’ve learned a lot,” Copes said.