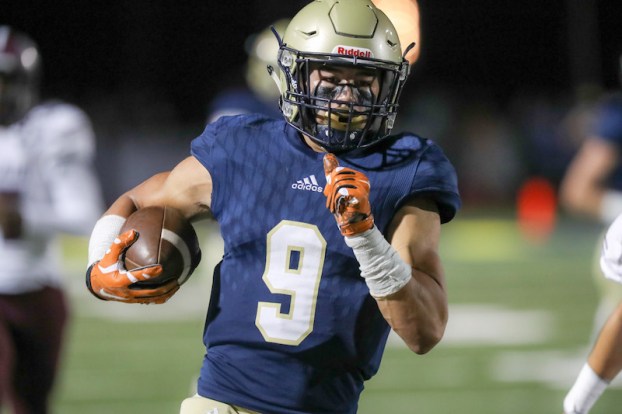 J.R. Tran-Reno had another stellar game with three touchdowns, giving him a total of seven in the last two games. (File)

BIRMINGHAM – Another solid night from running back/receiver/quarterback J.R. Tran-Reno and many others led to Briarwood clinching a playoff spot for the 2017 season by picking up a 49-14 win over Woodlawn, which moved them to 7-0 overall and 5-0 in region play.

“We’re trying to play a real long season and you have to get into the playoffs before you can win em so I’m tickled we’re back in the playoffs,” head coach Fred Yancey said after the game. Something he has repeated from the beginning of the season as his guys look to redeem a heartbreaking loss in the semifinals a season ago.

The impressive win was in large part due to Tran-Reno’s success for the second consecutive week. Last week in a 31-6 win over St. Clair County, Tran-Reno picked up all four of the Lions touchdowns. This week he wasn’t far off as he added three more for seven combined touchdowns in the last two weeks.

“He’s consistently going to do the job every time and he did tonight,” Yancey said of his star junior running back. “We played him at running back, receiver and quarterback, and he did a great job at all three positions.”

Briarwood came out on fire scoring four times in its first four possessions of the game as Woodlawn couldn’t stop the Lions offense at all. It led to the Lions taking a quick 29-0 lead, which is all this defense that’s giving up 8.3 points per game needed to win.

“We tried to really stress to the boys that if they came out and played good ball early on, they might get a chance to get their teammates in the game later,” Yancey said. “So they played hard to let the young guys come in and have some fun.”

Another positive Yancey saw was a clean, mistake-free game from his team, which hasn’t been the case as of late.

“When we can line up right and not turn the ball over and not have penalty problems, we start playing clean football,” he said. “We have enough talent to really be explosive when we play clean and that was the good thing about tonight.”

Briarwood not only clinched a playoff spot and remained undefeated on the season with the 49-14 win, but their hopes of a second consecutive undefeated season in region play are still alive.

With just two matchups left against Shelby County and Pleasant Grove, Briarwood has a strong chance to clinch the region championship next week against the Wildcats as a win would do the trick.