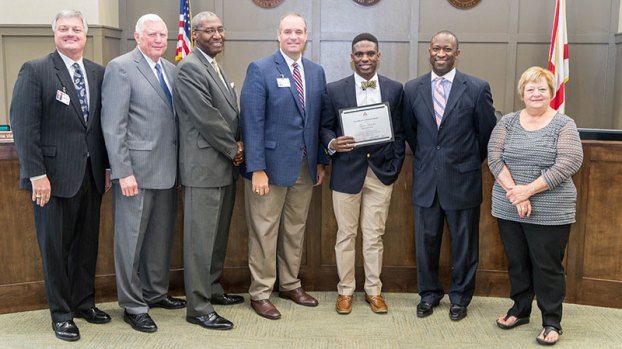 THS senior Tyger Quarles, third from right, is honored by members of the city’s Board of Education and school superintendent during a recent meeting. Quarles has been named to the State Superintendent Student Advisory Council. (File)

ALABASTER – A Thompson High School senior will have a direct voice in the future of Alabama’s education system after he was recently chosen for the Alabama State Superintendent’s Student Advisory Council.

In late September, the Alabama State Department of Education announced the members of the 2017-2018 council. The State Superintendent Student Advisory Council is made up of 16 middle or secondary school students from throughout the state who discuss how decisions are made at the state level and affect students throughout Alabama.

THS senior Tyger Quarles Jr. was one of only two students chosen from the Department of Education’s District 3, which serves portions of Shelby, Bibb, Chilton, Coosa and Talladega counties. Only 17 students were chosen for the council statewide.

“These students will directly provide student voice to the State Superintendent of Education on issues that affect them in our state,” read a state Department of Education release.

The honor is the latest in a long list of accomplishments Quarles has earned while at THS. He was recently chosen to represent Thompson’s Future Business Leaders of America chapter at the 2017 Alabama FBLA convention, and was recently selected to take part in the Envision Law Program at Stanford University.

Students were selected for the Superintendent’s Advisory Council based on their GPA, participation and leadership in schools and letters of recommendation. More than 320 applications were submitted for the council, according to the state Department of Education.

Judges of the student applications included representatives from the Alabama State Department of Education, Council for Leaders in Alabama Schools, Alabama Alliance for the Arts, Alabama Parent Teacher Association, Alabama Association of School Boards, Children First Foundation, A+ Education Partnership, current and past Alabama Teachers of the Year, current and past Alternate Teachers of the Year, local teachers and others.

“Members are advisors who act as liaisons between the ALSDE and the students of Alabama. Members will gather input from their district on students’ needs or opinions on local- and state-level policies or directives, discuss important issues at the meetings and give input,” according to the Department of Education. “Council members will meet two to three times throughout the school year with the State Superintendent. Topics discussed by the Student Advisory Council could include: the dropout rate, school culture and communication, student leadership, graduation requirements, testing, dual enrollment and career and technical education.”

By NEAL WAGNER / Managing Editor Several Shelby County cities have the lowest amounts of income inequality in the state, according... read more