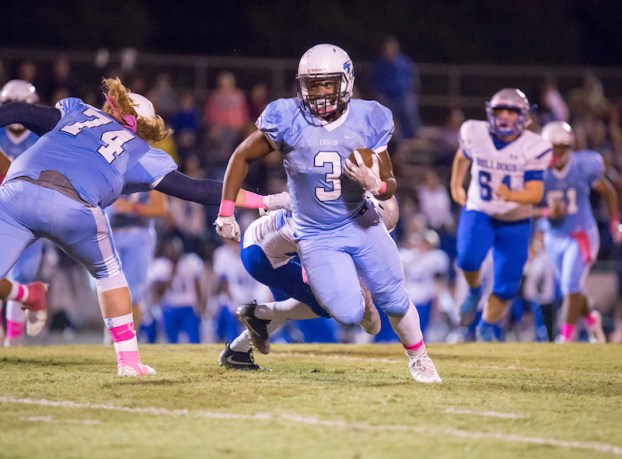 Calera's Dee Mickens had 100 yards rushing and four touchdowns to lead the Eagles to an easy 63-0 win. (For the Reporter/Brandon Sumrall)

CALERA – Pink checkered end zones to pink pom poms were in place on Friday night as Calera “Pinked Out” in support of Breast Cancer awareness, however it was a much different story on the football field as the Eagles saw nothing but red in a 63-0 rout of the Marbury Bulldogs.

The game turned sour quickly for the visiting Bulldogs (4-5 Overall;3-3 Region) as on the first play from scrimmage running back Zan Ingram put the ball on the turf and it was covered up by the Eagles (6-3;5-1). Two plays later and Decorean Mickens put the first points of the game on the board with a 1-yard touchdown run. With the PAT up and good, the Eagles took a 7-0 lead.

A quick four and out by Marbury saw the Eagles set up their second possession of the night at their own forty-eight where it took two plays for Calera to find the end zone on a 43-yard touchdown pass from Cornelius Brown to Chandler Smith.

Just four minutes into the game and the Eagles held a 14-0 lead.

With the Calera defense forcing the Bulldogs in to another three and out, the third Eagle possession started at their own 24-yard line. A 41-yard reception by Quindarius Crews and a 32-yard reception by Dee Woodson moved Calera down inside the Marbury red zone but a 5-yard loss on first down followed by a pair of short runs saw the Eagles attempt an 18-yard field goal that was no good thanks to a bobbled snap.

The Calera turnover set the Bulldogs up at their own 19 where a fourth-and-4 at their own 25-yard line saw Marbury pick up its first first down of the night thanks to a roughing the kicker penalty against Calera. Four plays later, and the Bulldogs were forced to punt once again.

The quick strikes by Calera continued with the ensuing possession as the third play of the drive saw Brown connect with Crews for a 39-yard touchdown that made the score 21-0 at the end of the first quarter.

After a scoreless drive by the Bulldogs, the Eagles set up first and ten at their own twenty-seven. A first down penalty backed Calera up five but a 32-yard run by Mickens along with a penalty against the Bulldogs moved the Eagles down to the Marbury seventeen where Ray capped the drive with a touchdown run to put Calera up 28-0.

With the Calera defense stifling the Bulldogs, three touchdowns by Mickens of 62 yards, 11 yards, and 1-yard, along with a 6-yard touchdown run by Tyler Agnew led the Eagles in taking a 55-0 lead to the locker room for the halftime break.

A running clock in the second half did little to slow down Calera and after another scoreless possession by the Bulldogs the Eagles punched in one more on the evening thanks to a 6-yard touchdown carry by Terry Burrells that brought the score to its final of 63-0.

“I am proud of them and the way we played. I would still like for us to understand the magnitude of playing at a higher level and maintaining that,” said Eagles head Coach Andrew Zow. “We came out tonight and the guys were clicking on all cylinders. We just have to duplicate that every week and it’s hard to when you’re dealing with sixteen and 17-year-old guys. You get that kind of performance and then they go and lay an egg during the practice week or during the next game. I have to sort of take it in stride in year two but our guys did pretty good tonight.”

Brown finished the night going 11 for 12 through the air for 290 yards and three touchdowns while Mickens added 100 yards on eight carries with four touchdowns.

By KARL HUNT | For the Reporter MONTEVALLO, Ala. — The Montevallo High School Bulldogs defeated Carbon Hill in Region... read more