COLUMBIANA – A 28-year-old Sterrett man who sped past a Shelby County Sheriff’s Office deputy directing school traffic before causing a wreck on Cahaba Valley Road will spend the next few years in prison after he pleaded guilty to a felony first-degree assault charge and multiple misdemeanor reckless endangerment charges on Oct. 31. 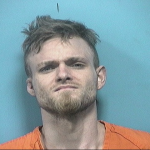 Bobby Jack Bernier pleaded guilty to the charges during a hearing in front of Shelby County Circuit Court Judge William Bostick. As a result of Bernier’s guilty pleas, Bostick sentenced him to three years in the Alabama Department of Corrections.

Bernier received credit for 1,001 days for time he served at the Shelby County Jail between his arrest and Oct. 31.

At about 3 p.m. on Feb. 4, 2015, a Shelby County Sheriff’s deputy directing school traffic on Cahaba Valley Road near Keith Drive observed a vehicle driving recklessly through traffic, according to a Sheriff’s Office press release.

A passenger riding in the suspect’s vehicle was transported to UAB Hospital with serious injuries, according to the Sheriff’s Office.

Bernier was taken into custody and transported by deputies to Shelby Baptist Medical Center. After the suspect was treated at the hospital, Bernier was charged with driving under the influence of a controlled substance, first-degree assault, third-degree assault, leaving the scene of an accident and six counts of reckless endangerment.

The Shelby County Sheriff’s Office and the Alabaster Police Department worked the case, according to court records.