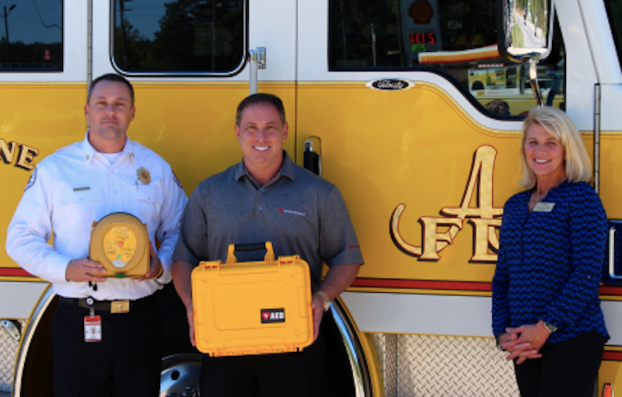 ALABASTER – The city of Alabaster recently completed the second phase of its Public Access Defibrillator program by placing AED units in police cars, city buildings, parks and recreation facilities through a partnership with Birmingham-based Cardiac Solutions. According to Cardiac Solutions consultant Jennifer Crook, the city received AEDs and other equipment earlier this week.

A press release from Cardiac Solutions stated that the purpose of the PAD program is to increase a person’s chance of surviving a sudden medical emergency in Alabaster by giving bystanders the equipment to perform CPR and defibrillation before first responders arrive on the scene.

“The city of Alabaster is leading the way in Shelby County by recognizing the importance of AEDs for the safety and well-being of its citizens, children, employees and visitors,” Cardiac Solutions CEO Jon Seale said in a press release. “Alabaster’s decision to place AEDs in patrol cars is an exemplary one. Their public access defibrillation program should serve as a model to other Alabama cities, both large and small.”

According to the press release, Sudden Cardiac Arrest is the leading cause of death in the United States, and recommend that bystanders start defibrillation within three minutes to increase the affected person’s chances of survival.

Alabaster Fire Chief Jim Golden voiced his support program, stating that it will better prepare citizens to respond to the event of a cardiac arrest in a timely manner and potentially save lives.

“(The AED’s) are absolute life savers,” Golden said. “By having mobile devices in our patrol units, Alabaster has yet another tool to quickly and appropriately care for everyone who lives and works in our city.”

Alabaster Mayor Marty Handlon said the city created its PAD program because it was simply the right thing to do.

“Any time we, as a city, can prioritize the health and safety of our citizens and employees, it’s a no-brainer” Handlon said.