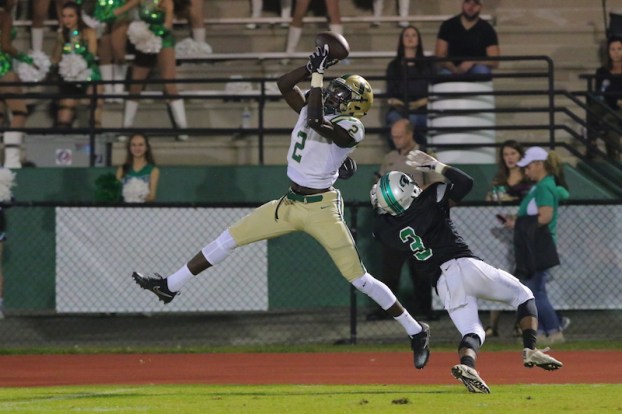 Edward Gipson goes up to make one f his four catches during the game as he ended with 67 yards and one touchdown to lead the Panthers to a 64-46 win over John Carroll. (For the Reporter/Eric Starling)

BIRIMGHAM – Pelham closed out the regular season on the road, facing the Cavaliers of John Carroll.  According to Coach Tom Causey, the Panthers were without eleven of their starters for this contest, and they knew the Cavaliers had been successful offensively against some really good teams this year.

The Panthers would hold John Carroll to a three and out on the first drive, and a great punt return by Jackson Weaver set the Panthers up at the John Carroll 29-yard line to start their first drive.  It would take just four plays for the Panthers to punch it in with Dylan Peterson taking it in from five yards out.  Gregory Blue’s extra point gave Pelham the early 7-0 lead.

The Cavaliers would score on their next possession and convert the 2-point conversion to take an 8-7 lead.

Pelham drove 79 yards on their next possession to regain the lead.  Matthew Rye connected with Edward Gipson twice during the drive, including the 41-yard touchdown strike with 6:29 left in the first.  Blue’s point after gave the Panthers the 14-8 lead.

John Carroll looked unstoppable on their next two drives with the exception of two failed 2-point conversion attempts.  Mid way through the second quarter, the Cavaliers were up 20-14 over the Panthers.

The Cavaliers attempted an onside kick that the Panthers recovered and eventually drove down for another touchdown.  Brandon Sledge would take the pitch around the left end from Rye and scored from six yards out.  The extra point was good and the Panthers were again leading.

The Panthers would add another score before the half when Peterson broke through the line for a 45-yard scamper with one-minute remaining in the half.  Blue would connect for the point after and the Panthers held a 36-26 lead at the half.

The second half would start like the first half ended with Rye calling his own number and breaking away on a 59-yard jaunt to the end zone.  Just thirty seconds into the half, the Panthers now had a 43-26 lead.  Rye would finish the night with 127 yard passing and two touchdowns, as well as 175 yards rushing and two scores.

Pelham pushed the score to 57-26 with two more touchdowns in the third quarter. Peterson would score on a 48-yard run on first and twenty-five, and Rye would score his second rushing touchdown with a 44-yard run.  Peterson finished the night with 13 rushes for 197 yards and three touchdowns.

The defense would get on the board to finish the night when Don Ball intercepted the Cavaliers and ran the ball back 37-yards for the pick six.  Another point after for Blue and the Panthers had a commanding 64-26 lead.

“Our offensive line probably played as good tonight as they have all year,” stated Coach Causey.  “These guys did what they have done all year long and it was a great team win.”

The fourth quarter would belong to the Cavaliers, but despite scoring 20 points, the deficit was too large to overcome.

The Panthers will travel to Spanish Fort next week as the first round of playoffs get underway.

By RICKY RUSTON | For the Reporter COLUMBIANA – The Shelby County Wildcats ended their 2018 campaign with a heartbreaking loss... read more