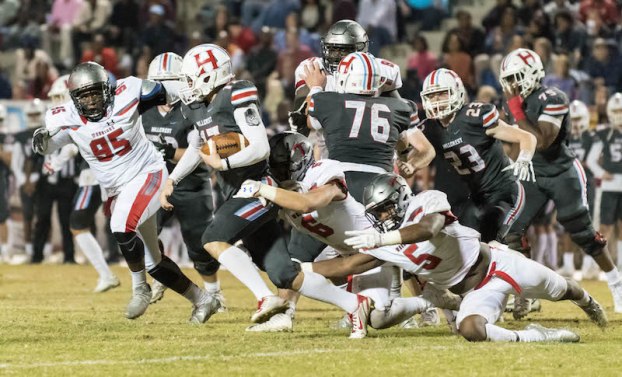 Thompson will host Huntsville in the first round of the playoffs this Friday night. It marks the Warriors' first playoff game in 10 years. (Reporter photo/Neal Wagner)

Ten games have come and gone and with it the 2017 regular season. For the last 11 weeks dating back to Thursday, Aug. 24, 11 county teams have taken to the field each week, but now only a select few remain as we head into the first week of playoff action.

Thompson, Spain Park, Pelham, Briarwood and Calera will be the last five county teams competing in 2017 as each has one goal in mind. A state championship. It will take four wins for either Spain Park or Thompson and five for the other three teams if they want to take home the coveted blue map.

Thompson ended the season as one of two perfect teams in the county as the Warriors finished 10-0 in the regular season for the first time since their 1982 state championship season.

Now that the Warriors have conquered that feat, beaten Hoover for the first time in school history and won their first region championship in 20 years, they’ll be looking to add to this historic season with the school’s second ever state championship.

Thompson’s playoff run, the first in 10 years, will start with the Huntsville Panthers in front of a home crowd at Larry Simmons Stadium. The Panthers are 6-4 on the season and very average scoring just 24.3 points per game and giving up 22.6.

It’s the exact kind of team the Warriors have taken advantage of with their potent offense scoring 41.5 ppg, as well as a strong defense giving up just 18.1 ppg.

Thompson has had a week to recover from its monumental win over Hoover in a less than stellar win over Hillcrest-Tuscaloosa that head coach Mark Freeman wasn’t pleased with. He and the team will use that as momentum to bounce back in a big way to start the playoffs. Thompson 42 Huntsville 20

Spain Park had hit some struggles in recent weeks by losing four of six games, with the two wins coming by nine points or less against their two easiest opponents.

The Jags needed some momentum in the final week of the regular season and they got it behind a 49-14 win over Minor. Albeit Minor was a 4-6 6A team, it gave SPHS some confidence moving into a matchup with No. 3 Hewitt-Trussville in the first round of the playoffs.

The main confidence builder came from Braxton Barker, who followed up his four-interception game against Oak Mountain with a 294-yard, five touchdown performance on senior night.

That’s the offensive spark this Spain Park team needed to see heading into a matchup with a Huskies’ team that is scoring 48 points per game and giving up just 15.5. The Jags are going to have to post a lot of points to keep up, which makes that strong final week by Barker key for momentum.

Hewitt comes into the game undefeated and may be the best team in the 7A classification, which will make it tough for the Jaguars to pull off the upset on the road. They’ll keep it close with their offense for a while, but the Huskies will eventually run away. Spain Park 28 Hewitt-Trussville 42

Pelham gets an unfortunate draw in the first round having been paired up against 6A No. 4 Spanish Fort, whose only loss of the season came to 7A No. 4 McGill-Toolen by just seven points.

The Panthers have enough offensive talent to contend in this game as they score 32 points per game, but the defense is actually giving up two more points per game at 34.8. That will be the difference maker against a Toros’ team that is scoring 40.3 and has won nine straight. Pelham 28 Spanish Fort 45

The No. 1 Briarwood Lions were the other team in the county to finish a perfect 10-0 during the regular season. It marks the first time since 2007, when the Lions went to the state championship game, that Briarwood has finished the regular season perfect.

Briarwood made easy work of 4A powerhouse Madison Academy in the regular season finale, 27-3, thanks to a stout defensive performance and will carry that momentum into a matchup with Crossville, who has lost six straight games to end the season.

They’re giving up 34 points per game, which doesn’t bode well going up against this dynamic offense, but more importantly, Crossville has scored zero, six, 14 and 14 in its last four games. That’s something that will kill them in a matchup with a Briarwood team giving up just 9.5 points per game. Briarwood 34 Crossville 7

If they want a deep playoff run, consistency will have to be the name of the game. The Eagles had won three in a row in dominating fashion winning games 41-14, 42-16 and 63-0, but ended the regular season with a wild 45-35 loss to Sylacauga.

At 6-4 overall this season, Calera will host a 5-4 Jackson team in the first round. It’s a game where Calera should be able to play one of their complete-team games as Jackson scores just 20 points per game.

That statistic matched with the Eagles’ explosive offense spells a win. It also helps that Jackson has lost four of its last five games. Calera 35 Jackson 24

By NEAL WAGNER / Managing Editor TUSCALOOSA – It may not have been the performance Thompson High School head... read more