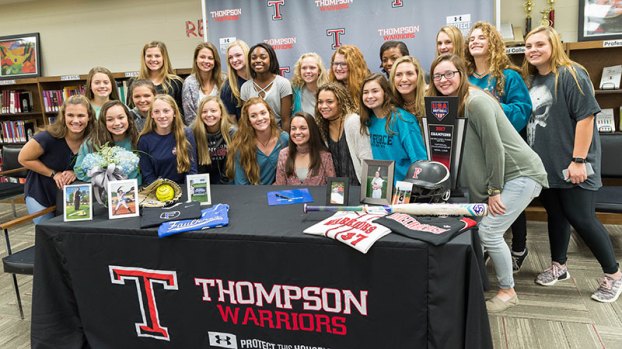 Bailey Whitfield, center, seated, is surrounded by teammates after signing a softball scholarship with Faulkner University during a Nov. 7 ceremony in the THS library. (Reporter Photo/Neal Wagner)

ALABASTER – As Thompson High School’s head softball coach, Kevin Todd spends plenty of time at the school during the summer break. But every time he traveled to the school, he got used to seeing a familiar face practicing at the school’s softball field.

“I come up here every day in the summer, and there was hardly ever a day I came up here in the summer when she wasn’t up here,” Todd said of THS senior softball standout Bailey Whitfield. “She wants to be good. Don’t ever lose that.”

Whitfield was surrounded by friends, family members and teammates as she inked a scholarship with Faulkner University during an afternoon ceremony in the THS library on Nov. 7.

Whitfield is no stranger to hard work and putting in the hours to be successful. She, along with teammates Lauren Haskins and Allie Miller, spent last summer competing with the Alabama Firecrackers travel team, and earned the 16U national championship in August.

She has seen plenty of success with the Warriors, and earned an honorable mention on the Shelby County Reporter’s All-County team after last season.

“Days like today are kind of what we live for, and it makes it all worthwhile,” Todd said. “To have Bailey reach her goal; parents, grandparents, you’ve all played a part in it.

“We are so proud of Bailey, and it all goes back to her parents and grandparents. Thank you for raising her into the child she is today. She’s a great young lady,” Todd said.

Todd said Whitfield kicked off a season of signings for the THS softball team and athletic program moving forward.

“This is the first of a few signings we will have this year, and the first of many to come,” Todd said. “Faulkner, you’re getting a terrific young lady with tremendous work ethic. When you get to Faulkner, it’s going to take a lot of work. Don’t let anyone stop you from reaching