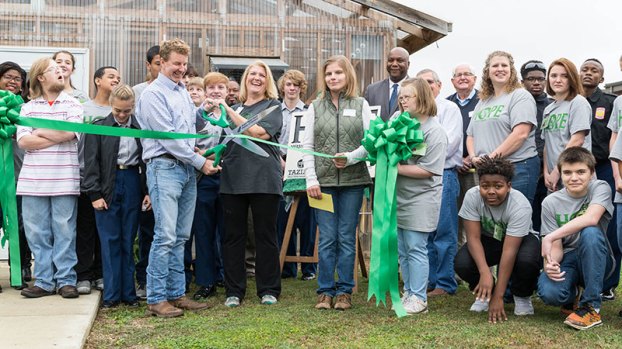 VINCENT – A new addition to the Vincent Middle High School campus serves as a tangible sign of the love and dedication the school and community has put into a program providing real-world job skills for area special-needs students.

VMHS cut the ribbon on its new greenhouse for the H.O.P.E. program during a Nov. 8 ceremony as the school celebrated five years of watching the program grow.

Through the H.O.P.E. program, which began in Vincent on Nov. 8. 2012, special-needs students at the school plant, grow and harvest a variety of herbs ranging from cilantro and thyme to parsley and rosemary to sell in the community. When the program began, it drew the attention of Taziki’s Mediterranean Café owner Keith Richards.

“We would not be here today without these students,” Richards said during the Nov. 8 ceremony. “Everyone has a great idea, but it’s all about how you execute it. It’s taken a lot of people to make this happen, and I’m excited about what’s ahead.”

“The ultimate goal is employment,” Vinson said. “They are learning that if you work, you get a paycheck. They are learning what is expected of employees, what a job is and how to get a job. They’re learning all of this before they even graduate high school.”

With the addition of the greenhouse, which was constructed by Vincent agriscience teacher Ted Gipson and his students, the H.O.P.E. program has been able to consolidate much of its growing into one location instead of in flower beds throughout the VMHS campus.

“It allowed me to teach my students a lot of things, from reading blueprints and building to wiring for electricity,” Gipson said.

Since beginning in Vincent in 2012, the H.O.P.E. program has expanded to other schools in Shelby County, throughout Alabama and in several other states in the eastern United States.

“And it all started here at Vincent Middle High School,” Vinson said.

To learn more about the H.O.P.E. program, visit Wegrowhope.com.

By Chris Megginson | For the Reporter PELL CITY – After a 1-19 combined record the last two seasons, Vincent’s... read more