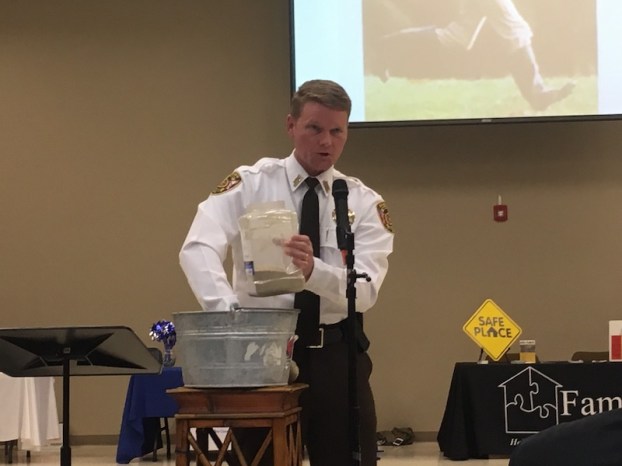 SCSO Deputy Chris George uses a jug, several rocks and some sand to demonstrate the importance of prioritizing faith during his speech at the South Shelby Chamber luncheon on Nov. 9. (Reporter photo/Amalia Kortright)

COLUMBIANA – The South Shelby Chamber of Commerce used its final monthly luncheon of 2017 to highlight local nonprofit organizations throughout Shelby County at the First Baptist Church of Columbiana on Thursday, Nov. 9.

The luncheon was primarily sponsored by the Jimmie Hale Mission. According to Jimmie Hale Mission Executive Director Tony Cooper said local nonprofits are vital to many Shelby County residents and he was glad to see how they were being emphasized by the South Shelby Chamber.

“This is incredible, all of these fine nonprofits around Shelby County,” Cooper said. “You can tell a lot about communities by how they help people in need.”

Shelby County Sheriff’s Office Deputy Chris George served as the luncheon’s guest speaker. George began his speech by pointing out the American flag and encouraging the audience to reflect on the sacrifices that the country’s military personnel and veterans have made.

“There’s the red on that flag, which for me, having had friends perish to protect that flag, reminds me of their blood. The things that they did to ensure that we have the liberties that we enjoy now are woven in the thread of that flag,” George said. “As divided as we may seem, we’re no different than any other dysfunctional family in this country. We are the United States of America, and that top left box with the blue background and the stars reminds me that we are united.”

He also asked members of the audience to recite the second sentence of the U.S. Declaration of Independence: “We hold these truths to be self-evident that all men are created equal, that they are endowed by their Creator with certain unalienable Rights, that among these are Life, Liberty and the pursuit of Happiness.” According to George, the passage indicates that America was founded on Judeo-Christian values.

“We were designed by something greater than us, and we’re all equal. Everyone in this room is different, but we’re all equal,” George said. “When you look at the creator with the capital ‘C,’ the white on that flag reminds me that we are formed on Judo-Christian principals. I don’t care what anyone else tells you.”

He also urged the audience to prioritize God above everything else. He also cited Hebrews 12: 1-2 for emphasis: “Therefore, since we re surrounded by such a cloud of great witnesses, let us lay aside every weight and the sin that so easily ensnares us. And let us run with endurance the race that is set before us, looking unto Jesus, the author and venture of our faith, who for the joy that was set before Him, endured the cross, despising the shame, has sat down at the right hand of the throne of God.”

To demonstrate his point George poured sand into a jug and stacked several rocks on top, until the rocks no longer fit.

“When we look at our life, it’s like this tarnished bucket, and it’s empty. Throughout the day, you start to fill it with certain things,” George said. “Maybe we’re not putting the things in life with the right priority. At the end of the day, when we look at our lives, we realize that we’re not content and something is still missing. You need to be spending more quiet time with God. Maybe, you need to be praying more, and maybe you need to be a better witness. Unfortunately, in our life, there’s not enough room for all of that stuff.”

Using the rocks to symbolize faith and prayer, George placed them into the jug and poured the sand over it.

“Not only does everything fit, but you’ve still got room for other things,” George said.