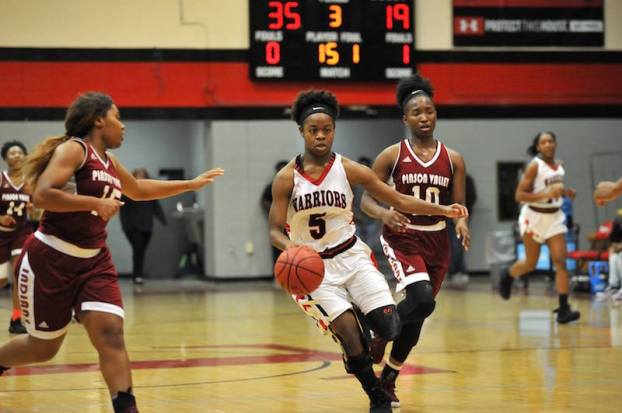 Thompson's Kahyanne Bolton brings the ball up court and by defenders during the Warriors first game of the season in which they won 54-42 over Pinson Valley. (For the Reporter/Larry Dancy)

ALABASTER – The girls basketball opener at Thompson High School had its fair share of fireworks–in more ways than one.

The Warriors (1-0) led by as many as 18 and staved off several comebacks to defeat the Pinson Valley Indians (0-1) 54-42 on Thursday, Nov. 9. The got off to a quick start as the two teams combined for 31 points in the first quarter.

“We just needed to settle down, this being our first game everyone was anxious so it just took some minor adjustments defensively,” said head coach Jovanka Ward.

And settle down they did. The light turned on for the Warriors on offense going 7-14 from the field and making all four of their free throws. The defense simultaneously turned up the heat as well forcing eight turnovers and didn’t give up a single basket in the second quarter.

All-in-all, Thompson outscored Pinson Valley 20-3 in the period to take a commanding 35-19 lead at the half.

Things didn’t get easier for either team in the second half as the two teams combined to make just three shots in the third quarter.

Courtney Whatley’s layup with 4:38 to go ended Pinson Valley’s dry spell of nearly 12 minutes. The Indians closed the quarter on a 5-0 run, but Thompson still held a 41-28 advantage heading into the final quarter.

The fourth quarter featured an epic back-and-forth battle fueled by a fight that broke out between players with 6:36 remaining in the game.

Four players had to sit for the rest of the game, including three from the Warriors, but Ward was proud of how her other players stepped up to finish the game.

“I was really excited to see some of our younger players responded, because we know where our strength is with our guards,” she said. “So when they went out it was huge to see how the kids maintained their composure and hung onto the lead.”

The Warriors only made one shot in the final minutes, but hit 11 of their 14 free throws down the stretch to quell the Indians’ comeback.

The teams combined to shoot 29 total three throws in the fourth quarter.