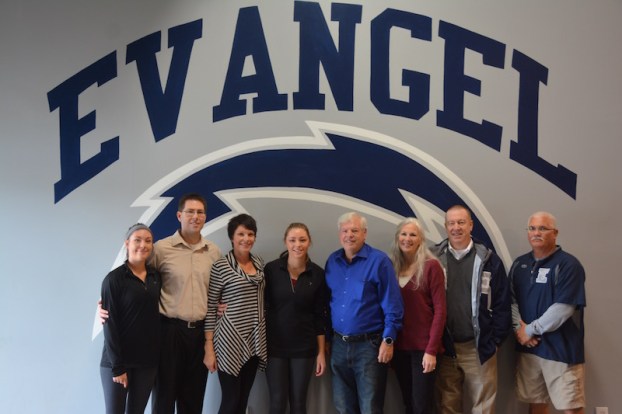 Evangel's Kinsley Gardner poses with her family, friends and coaches after signing her letter of intent to join North Greenville University. Gardner is the No. 11 ranked player in the state. (Reporter photo/Alec Etheredge)

ALABASTER – Since the age of 11, Kinsley Gardner has been drawn to the action of playing tennis and always dreamed of going on to play the game she loved collegiately.

On Wednesday, Nov. 8, that dream became a reality as Gardner signed on the dotted line to attend North Greenville University in Greenville, South Carolina on a tennis scholarship.

“It’s very special,” Gardner said. “Ever since I started I just really wanted to get better.”

Gardner started in soccer and volleyball thinking she may fall in love with those sports, but said neither had the appeal that tennis did.

“Tennis is just amazing,” she said. “I love this sport, so I’m really excited to play at the next level.”

Her love for the game started at the age of 11, but it’s a love that she said was always in her thanks to her dad who played tennis at the high school level. Gardner said her dad is the one that really motivated her to play and helped her gain her passion for the sport.

“I was already very athletic as a child and he just inspired me to play tennis,” Gardner said.

It’s a sport that she not only enjoys playing, but one that she has earned a lot of high recognition for.

According to the United States Tennis Association rankings in the state of Alabama for 18-year old girls, Gardner ranks as the No. 11 best player in the state. During her 2017 campaign, Gardner posted an overall record of 41-28.

A resident of Chelsea, Gardner will now move to Greenville to try and help improve the Crusaders’ women’s tennis program.

“I’m just excited to play my best and glorify God in this opportunity,” she said. “He’s the one who gave me this talent so that’s what I’m going to continue doing.”

Gardner never did participate as part of the Evangel tennis team, but has done all of her schooling through the Lightning program, which she said has helped her have the time to balance her busy tennis schedule as well as school.

Gardner said that it is a great opportunity to be coached by someone like Tarr and she even gets to hit around with some of the players in their free time.

While she gets to play with and against some of the best talent, there’s one person she enjoys hitting the ball with a little bit more than the rest.

“My sister hits with me every day,” Gardner said. “Even though we fight sometimes, she’s still the best sister because she’ll always hit with me.”

Gardner said it’s an exciting opportunity to have worked so hard toward something and couldn’t have done it without the support of her family.

By ALEC ETHEREDGE | Sports Editor COLUMBIANA –  For her entire life, Lauren Carter has known nothing but softball, having... read more