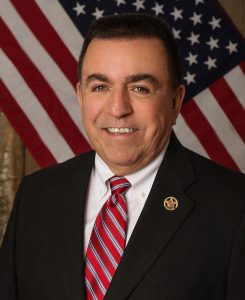 “I was not asked for an endorsement, nor did I give one,” Samaniego said.

On Wednesday, Nov. 8, Samaniego and other county sheriffs met in Montgomery to discuss upcoming legislation. Samaniego said they were expecting Moore to make an appearance at the meeting at around 3 p.m., but he had to leave before Moore arrived for a prior engagement.

“He got several strong endorsements from other sheriffs, but I was not there and I would not have participated,” Samaniego said.

While he is unsure why he was inaccurately listed, Samaniego speculated that the campaign listed the names of Republican sheriffs who were in attendance at the meeting.

Samaniego said he has no plans to endorse any candidate for the U.S. Senate seat, and is currently focusing on his own campaign for re-election as Shelby County Sheriff in January.

Samaniego’s name has since been removed from the website, and he said he received an apology from a member of Moore’s campaign.

“A Rich Hobson called and apologized for the mistake,” Samaniego said.

As of Monday, Nov. 13, multiple messages left with representatives from the Judge Roy Moore for U.S. Senate campaign had not been answered.