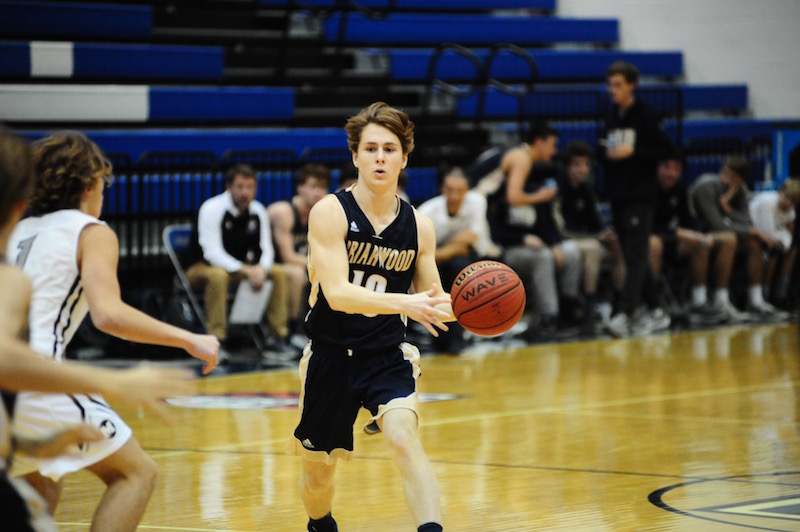 KIMBERLY – Despite missing several varsity starters due to the football team still being in the playoffs, including leading returners Carson Donelly and Michael Hiers, Briarwood competed well at the Mortimer Jordan Jeff Dennis Jewelers Invitational from Saturday, Nov. 18 through Tuesday, Nov. 21.

After splitting the first two games with a 52-45 loss to Gardendale and a 74-47 win over Hokes Bluff, Briarwood squared off against a familiar foe in Moody—a team that resides in the same area and the Lions will face in area play this season—in the fifth place games looking to improve their record above .500.

Briarwood came out strong in the first quarter despite missing some of those key playmakers thanks to several baskets by Zac Nuyt and Jack Dicen.

Those two along with others, helped the Lions jump out in front 16-7 at the end of the first quarter after leading by as many as nine at one point in the period.

Hayden Lamey and Owen Lester started the scoring in the second quarter for Briarwood, but Moody was able to go on a 10-4 to start the quarter as they chipped away at the lead and got within three at 20-17.

Dicen got hot again and responded with a 4-0 run by himself, before the Blue Devils came right back with 7-0 run to take their first lead of the game at 27-26.

Dicen, however, was in the zone and hit one more 3-pointer just before the half to give the Lions a two-point, 29-27 lead, heading into the half. Dicen had nine in the second quarter alone and 14 in the first half.

Both teams struggled to start the third quarter with the first basket coming at the 6:00 mark on 3-pointer from Moody to regain lead. That seemed to get the scoring going as Lamey answered with a 3-pointer of his own.

Briarwood eventually gathered a 38-32 lead, but Moody got back within three thanks to another 3-pointer.

The teams battled back-and-forth over the next few minutes, but the Lions were able to end the quarter on an 8-4 run to take a 48-41 advantag into the final quarter.

Just like they had done to start the third quarter, Moody started the final period with a 3-pointer to immediately cut into the lead. The teams swapped 5-0 runs shortly after as the Lions found themselves back up 53-49.

Briarwood, however, answered with the final run of the game finishing the final few minutes on a 16-5 run to win by the final of 69-54 thanks to several forced turnovers by the defense and easy fast-break layups by the offense.

The Lions moved to 2-1 on the season with the win as they placed fifth in the tournament. Dicen led the Lions with 24 points in the game, hitting four 3-pointers. Lamey added 16 more for Briarwood; while Nuyt and Izaiah Jones added 12 and 10, respectively, to give the Lions four double-figure scorers.