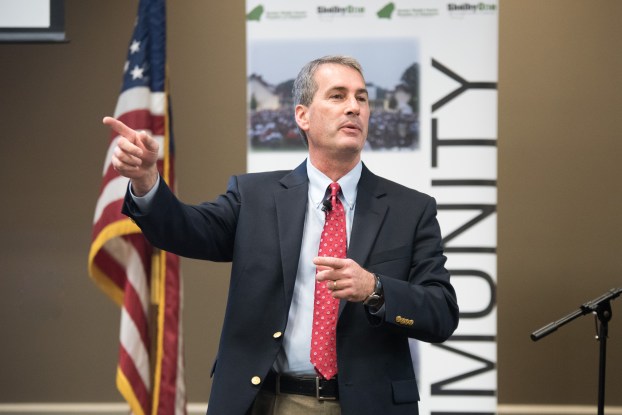 Lew Burdette shares ‘Lessons from the well’ at Prayer Breakfast

PELHAM – At the Greater Shelby County Chamber of Commerce’s 20th annual Prayer Breakfast, keynote speaker Lew Burdette shared some life lessons that he learned as a teenager in the midst of a life or death situation.

Each year, the Prayer Breakfast serves as an opportunity for the community to gather to give thanks and fellowship during the holiday season. The event was held at the Pelham Civic Complex on Tuesday, Nov. 21.

Burdette is the president of Kings Home, which operates 22 Christ-centered long-term therapeutic group homes and independent-living facilities for youth, women and children in four counties. He said Kings Home encourages its residents to not let anything that has happened to them hold them back from dreaming big and having hope.

“God uses us to transform lives,” he said. “We stand in the gap when people need it most.”

Burdette told the stories of three different people who all found hope and brighter futures since they arrived at Kings Home. He spoke of a young man who always had a desire to play football, but was never able to join a team.

“This young man is now a safety on the Vincent High School football team,” Burdette said. “He said he never thought he’d get a chance to play on the team, but now that’s a reality for him.”

He also spoke of a young lady, who started college at UAB this past fall.

“She came to Kings Home in the ninth grade and back then she never thought she would be able to attend college – now she’s attending UAB on a full ride,” he said.

Lastly, he told the audience about a woman from Montana who was a victim of domestic violence. One day she got on a bus and rode it as far away as she could. She ended up in Alabama.

“Somebody told her that Kings Home could help her, so she gave us a call and we went to go pick her up at 2 o’clock in the morning,” Burdette said. “We’ve all had bad things happen to us. It’s a bond we all share and that’s the connection I have with the people we help.”

Burdette shared his own story of overcoming adversity. It took place two days after Christmas in 1974 when he was kidnapped for ransom at 15 years old. He was leaving work at his father’s grocery store at about 6 p.m. when he was forced into a light blue Mustang at gunpoint by two young men just a few years older than him.

“They proceeded to tell me that they were kidnapping me for a ransom of $250,000, and wanted to know if my dad could get them the money that night,” Burdette said.

After realizing that their plan had some flaws and was far-fetched, the men drove to a remote area in the woods and directed him at gunpoint to walk away from the dirt road and through thick brush for about 30 yards. When they instructed him to stop, they hit him the back of the head with the butt of the gun leaving a big gash in his head.

“After a couple of minutes, one of the men slammed his fist into my chest and I immediately felt a sharp, piercing pain,” Burdette said.

He had been stabbed with a knife. He rolled over in pain, and the man stabbed him in the back three more times. They dragged him to an old, abandoned water well and threw him in. It was about 30 feet underground. They started tossing broken up pieces of foundation on top of Burdette in an attempt to cover him up.

“Soon a flashlight shined down on me, and they began shooting,” Burdette said. “The first three shots missed, but the fourth shot ripped into the back of my head.”

Thinking that he must’ve been dead, the men left. Burdette said God gave him the strength to climb out of that well and crawl to a nearby shack for help. Doctors told his parents that there was a 5-10 percent chance that he would survive through the night. He had a collapsed lung and severe shock and loss of blood.

Doctors said that even if he did make it through the night, pneumonia and infection would set in, likely leading to death within a couple days. But to the doctors’ surprise, he survived and was released from the hospital in two weeks.

Throughout the ordeal, Burdette said he learned valuable lessons.

“The first thing I learned was respect,” he said. “Those men did not respect me. If we respected each other more there wouldn’t be as many murders and bad things happening in the world.”

He also learned to always “believe God for the impossible” and to trust in God because without him there is no other way. He said he learned to persevere because even if he doesn’t see a solution to a problem, God always has a plan.

“It reminds me of how fragile life is,” he said. “Whatever you do, do it with all your heart. And remember that God can exceed all of our expectations.”

PELHAM – Keeping with a longstanding tradition, the Pelham Beautification Board will journey through the city on Tuesday, Dec. 5,... read more