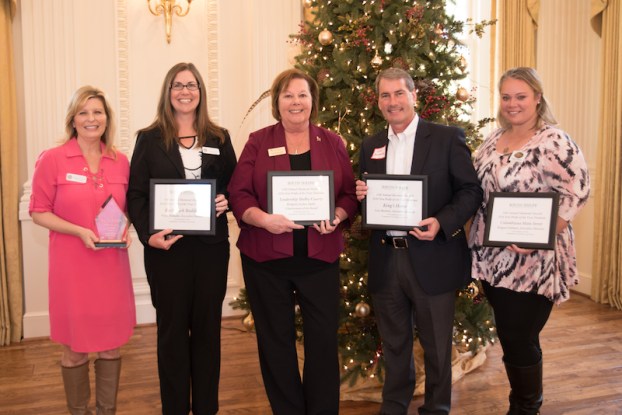 The 2017 Diamond Awards luncheon will celebrate the accomplishments of local residents, businesses and nonprofits Thursday, Jan. 11, 2018, at the Columbiana First Baptist Church. (File)

COLUMBIANA – The South Shelby Chamber of Commerce is seeking nominations for its 12th annual Diamond Awards luncheon, which is scheduled to take place from 11:30 a.m. to 1 p.m. on Thursday, Jan. 11, 2018, at the Columbiana First Baptist Church.

According to Executive Director April Stone, the purpose of the Diamond Awards is to recognize individuals, businesses and other organizations for going above and beyond in their work throughout 2017.

While the Diamond Awards have typically been held in December, Stone said the Chamber chose to push it back to allow more local business owners to attend.

“The personal and professional obligations are already there in December,” Stone said. “In being attuned to the needs of our members, we recognize that a lot of our retail businesses could not shut their door for three hours to attend a luncheon.”

Stone said this year’s Diamond Awards will also not feature a guest speaker, in order to place more emphasis on each nominee and winner and respect everyone’s schedule.

“We want to be conscientious of everyone’s time,” Stone said. “Instead, we’ll listen to each other’s stories and send everybody back to work.”

“It’s very easy to nominate,” Stone said. “You can make as many nominations as you like.”

She also said that businesses and organizations can nominate themselves to showcase their accomplishments throughout the year.

“We want to hear your stories,” Stone said. “I encourage people to nominate their own organizations because, in some instances, nobody tells your story better than you.”

An RSVP is required, and entry costs $15. Seat reservations can be made by contacting Stone by email at director@southshelbychamber.com.

ALABASTER – Six students from schools in Columbiana, Wilsonville, Shelby and North Shelby County were recognized at the Character in... read more