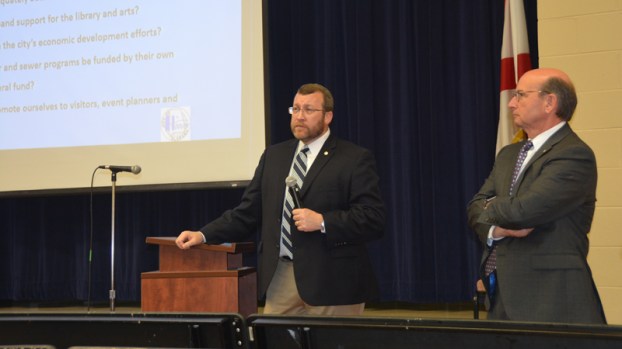 HOOVER – Residents of the eastern side of Hoover voiced concerns about feeling disconnected from the city during the final Future Hoover meeting on Tuesday, Nov. 28, at Greystone Elementary School.

Mayor Frank Brocato described the Future Hoover meetings as an “opportunity for our citizens to have a dialogue with the mayor’s office and city officials.”

The meeting at GES, which drew about 30 residents from Greystone and surrounding communities, was the fourth one held, following meetings in other parts of the city.

-Education. The mayor said officials realize the importance of the city’s school system and have allocated $5 million in funding during the current fiscal year. “It’s the backbone of our city,” Brocato said about Hoover City Schools.

-Transportation. The mayor noted U.S. 31, Alabama 150, South Shades Crest Road, Valleydale Road and U.S. 280 and its corridors as areas that will need to be addressed.

-Library and fine arts. A fine arts and performing arts center has been discussed and is being considered by officials.

-Economic development. The city’s first economic developer was recently hired, Brocato said, and the Hoover Industrial Development Board has been reestablished.

-Stormwater and sewer programs. City-owned sewer systems serve about 11 percent of residents, operate at an annual deficit of about $1 million and will need capital improvements of about $7.2 million over the next five years, Brocato said.

Rice then went through each category and asked for residents’ feedback.

There were comments about a lack of space for meetings in eastern Hoover, a Hoover City Schools development program for soliciting donations, and traffic on U.S. 280 and Valleydale Road.

Those in attendance seemed to be in favor of an arts center, with one recommending a center that could seat about 1,100 people, another saying she often drives to Columbiana for Shelby County Arts Council programming and a third suggesting possibly building a center in conjunction with Jefferson State Community College.

“We have three different arts groups in the city, and they’re looking for a way to weave their efforts together,” Rice said.

Officials also discussed how the city collects less sales tax from online purchases than from brick-and-mortar retailers in Hoover. They said Hoover not having its own designated zip code or codes is to blame for the city losing out on tax revenue.

Residents said the city would be justified in exiting the sewer business and talked about their own high rates for sewer service.

They also asked about requiring developers to install sidewalks and the plan for apartments at the planned Tattersall development near the intersection of U.S. 280 and Alabama 119.

Though residents were concerned about the inclusion of apartments, Brocato said retailers that would locate in such a development often want the assurance of adjacent housing, and he pointed to the village-like design of the development, with pedestrian access a priority, as a step in the right direction.

“I think that’s the kind of development that needs to happen all over the city,” Brocato said. “That’s really what people want.”

ALABASTER – Members of the Alabaster community discussed the root causes of drug and alcohol abuse among youth at the... read more