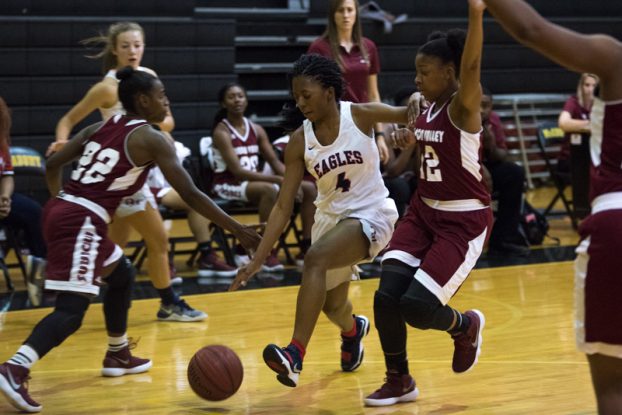 Kailey Rory had more than half of Oak Mountain’s points as she scored 19 of their 35 points in a 35-26 win over Chelsea. (File)

NORTH SHELBY – The Chelsea and Oak Mountain girls basketball teams have started the season in complete opposite directions. Chelsea had dropped six straight coming into the game, while Oak Mountain sat at 5-2 with its two losses by a combined five points.

None of that mattered when the two rivals squared off against each other on Tuesday night, Nov. 28, at Oak Mountain High School.

Both teams fought from start to finish, which led to a low scoring game, but in the end turnovers cost Chelsea a chance at the win as the Eagles went on to pull away thanks to a strong defensive third quarter to win by the final score of 35-26.

Coming out of the half, Oak Mountain led 19-14 to show the low scoring affair that was taking place, but Chelsea was still very much in the game only down by seven.

For most of the third quarter, Chelsea struggled to get anything going and started the period with 10 straight turnovers and no shots in the first 4:30 of the third.

The Eagles eventually were able to extend their lead to 13 points at 27-14, before Chelsea finally made some late baskets to end the quarter on a 4-0 run and cut the lead to 27-18.

Despite the struggling play on the offensive side of the ball, they still had plenty of opportunity heading to the fourth quarter.

The final quarter was much cleaner for the most part. Chelsea’s much more protective and fundamentally sound offense was able to claw back within four thanks to an 8-3 run to start the quarter.

With the Eagles up just 30-26, Oak Mountain was starting to feel the pressure, but their defense turned back up the intensity to force a couple of turnovers and grab an offensive board.

The effort kept Chelsea from scoring again as the Eagles knocked down their free throws late to win by the final of 35-26.

Oak Mountain was led by Kailey Rory, who had 19 of her team’s 35 points. Chelsea was led by Michaella Edwards, who posted 18 of the Hornets’ 26 points.

Chelsea fell to 0-7 with the loss, while Oak Mountain improved to 6-2, with their only losses being to McAdory by a combined five points.