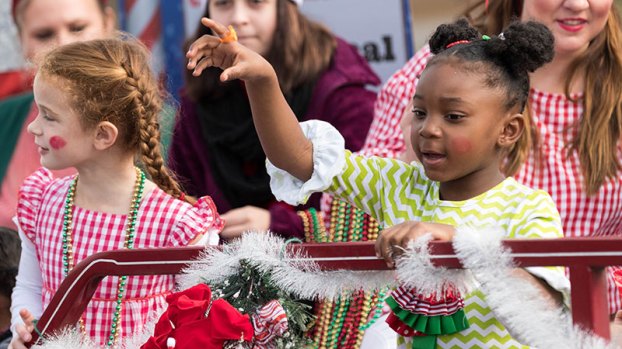 Girls toss candy to the spectators lining U.S. 31 during the Alabaster Christmas parade on the morning of Dec. 2. (Reporter Photo/Neal Wagner)

ALABASTER – Thousands of spectators lined U.S. 31 in Alabaster on the morning of Dec. 2 to celebrate a longtime city tradition of welcoming the holiday season during the annual Christmas parade.

Alabaster resident and local historian Bobby Joe Seales served as the grand marshal for this year’s parade, and rode in the parade’s lead vehicle, which was adorned in Alabama Bicentennial celebration decorations.

This year’s parade carried the theme “Christmas melodies,” and all floats incorporated the theme into their designs and productions.

The parade followed the same route as previous years, and began at the Ernest McCarty Ford dealership on U.S. 31 before turning right onto Second Place Northwest, traveling down First Street Southwest and ending at the stop sign in front of Southbrook Village.

During the parade, which was organized and sponsored by Alabaster city personnel and the Alabaster Beautification Board, the two southbound lanes of U.S. 31 was closed, and northbound and southbound traffic was diverted onto the two northbound lanes.

The city set up a judging station in front of the former City Hall building on U.S. 31, and floats will had a chance to conduct one-minute performances for the judges when they stopped in front of the building.

Emerging from the fog: Briarwood advances to state title in wild win

By SETH HAGAN | For the Reporter  NORTH SHELBY – There was something magical hanging in the air over Briarwood... read more