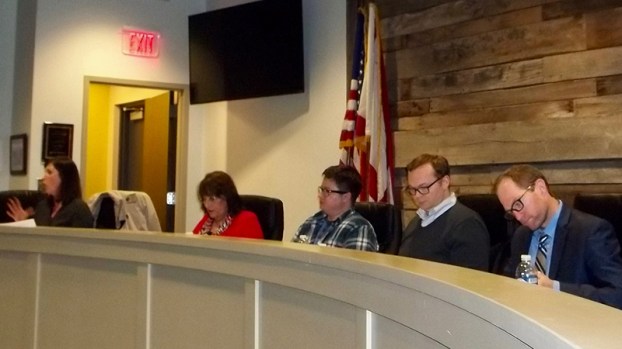 MONTEVALLO – A transgender man, a transgender woman, a Baptist minister and a lawyer — all on a panel organized by a political scientist — discussed the proposed Montevallo Non-Discrimination Ordinance Monday night at Montevallo City Hall.

Dr. Andrea Eckelman put the group together as a way to help the city’s residents understand what the proposed NDO could do and what it can’t do.

Jamie Pressley and Elaine Stephens said it will make them feel safer and more welcome.

And it won’t take away anybody’s right to practice his own religion, said the Rev. Daniel Stallings, pastor of University Baptist Church.

If somebody lies to a court about being trans-gender to retaliate for being fired, the liar can face criminal penalties for perjury, said Steve Rygiel, a lawyer who handles discrimination claims.

Rygiel said his thorough research yielded no incidents where a trans-gender person had assaulted another person in a public bathroom.

Most of the objections raised to the proposed NDO in its months of public consideration have stemmed from concerns about public bathrooms and religion. Some also have fretted that a person could sue under the ordinance by claiming to be LGBTQ after the fact of being fired.

The NDO’s goal would be to protect against discrimination in housing, services, use of public facilities and employment, and LGBTQ individuals would be added to the conventional protected classes of race, religion and sex. Of the LGBTQ equation, the “T” appeared to be causing the greatest pushback, Eckelman said.

Stallings said that his undergraduate years as a music major at Samford University brought him into contact with the LGBTQ community. “Making friends across the LGBT spectrum began my journey to becoming an ally,” Stallings said.

Later, Eckelman directed to Stallings a question submitted by someone in the audience of about 60: “Why should (the LGBTQ community) be granted rights at the expense of religious rights?”

“We are talking about protecting the very basic rights of a minority population,” he replied. “That is not what religious persecution looks like” The First Amendment protects religious freedom, he said, “but it gives no one the right to discriminate against anyone else.”

Stephens and Pressley discussed, with both humor and pathos, the years-long, complicated path of gender transition via therapy, hormones and surgery, as well as the “bathroom” issue. “You don’t just wake up one morning and say ‘I feel like a guy today,’” Pressley said.

“I have never been in a women’s room that did not have doors on the stalls,” Stephens said. If a biological male exposed himself in a ladies’ room, she said, “that is against the law.”

Yes, said Rygiel, and it still would be illegal after an NDO passed.

Benefits to Montevallo include standing out as an inclusive community of economic opportunity, Rygiel said; buffering discrimination complaints via the NDO’s Montevallo Human Rights Commission could head off expensive and lengthy federal litigation.

The pain of being torn between one’s inner self and one’s biological self starts at an early age, Stephens and Pressley said.

In an exchange that brought chuckles from most of the audience, Pressley described how, as a little girl, he had a hot argument with his father because he wanted to wear a necktie. “He wouldn’t let me.  He wanted me to wear this dress with a big strawberry on the front.”

“I would have worn that dress,” said Stephens, who transitioned from a man four-and-a-half years ago.

The City Council will take up the NDO “no sooner than February,” Mayor Hollie Cost said.

PELHAM – The Pelham Public Library recently announced a handful of events for adults that will kick off at the... read more