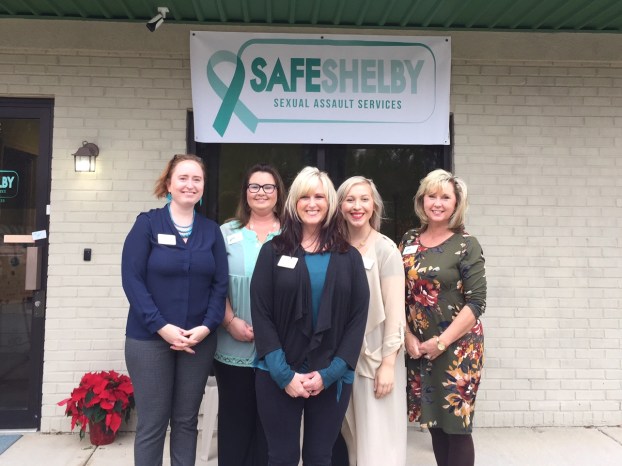 Sexual assault clinic reflects on a year of service

PELHAM – On Tuesday, Dec. 5, leaders from throughout Shelby County gathered to reflect on the accomplishments of SafeShelby – a sexual assault services clinic. Dec. 1 marked the clinic’s one year anniversary.

In honor of the clinic’s anniversary, an open house was held where several Shelby County leaders spoke about the impact SafeShelby has had thus far.

In its first year, SafeShelby completed 40 forensic exams for sexual assault survivors – 38 females and two males – and provided counseling for 30 individuals who have been affected by sexual assault.

SafeShelby is the result of a partnership between SafeHouse and Shelby County that provides services for survivors of sexual assault and domestic violence who live in Shelby, Coosa, Clay, and Chilton counties.

Forensic exams are available to all sexual assault survivors ages 14 and older. During the exams, medications to prevent pregnancy and sexually transmitted diseases are also administered.

All SafeShelby sexual assault services are free and confidential and are available with or without a forensic examination. Exams are conducted by sexual assault nurse examiners with assistance from volunteer victim advocates.

A balloon release took place at the event with each balloon symbolizing each of the 40 sexual assault survivors the clinic served in its first year.

Other accomplishments include establishing and facilitating the only support group for male sexual assault survivors being offered in Alabama, logging more than 9,000 on-call hours and providing training to law enforcement and first responders about how best to handle sexual assault and domestic violence victims.

Brasher said the training educates first responders about how to access services available to sexual assault and domestic violence victims and how to decrease trauma to victims.

SafeShelby has also hosted How to Help workshops that educate friends, family and the community on how best to provide support for a loved one in the aftermath of sexual assault.

With the facility being a nonprofit, Program Manager LeAnne Knight said volunteers are vital to the clinic’s operations. In a year’s time, the clinic recruited 32 volunteers, which they call victim advocates.

Brasher said advocates go through extensive training and provide assistance to victims during forensic exam process as well as being on-call to respond to crisis situations.

“They’re there to help victims through the process and to be a source of emotional support,” she said. “They let them know what’s happening every step of the way.”

In the coming years, Brasher and Knight said their goal is to get the message out that sexual assault doesn’t just happen to females, but males, special needs individuals and the elderly.

“Those are actually the highest risk and most vulnerable groups,” Brasher said. “People in those groups are also the least likely to report abuse.”

For more information about SafeShelby, go to SafeHouse.org. The SafeShelby crisis line can be reached at 669-7233.

All Shelby County offices, all local school districts and some private businesses are closed in the wake of a snowstorm... read more