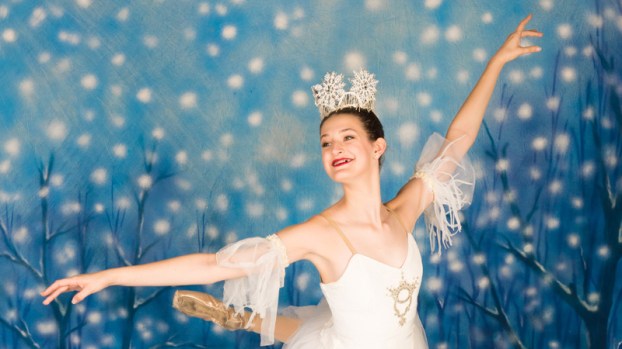 She will portray the Snow Queen and two other roles in the production.

Allison’s mother, Eva Pendleton, said her daughter has been dancing since age 3, and has been in various roles in “The Nutcracker” since fourth grade.

“The closest she got to the Snow Queen role was in seventh grade when she danced as Clara,” Pendleton said. “She’s worked hard for a long time, and we’re proud of her.”

“The constant repetition of perfecting the role is exhausting, but challenging myself to become each character is exciting,” Allison Pendleton said. “Dance has given me confidence, taught me time management and pushed me to be able to think on my feet.”

The performance on Dec. 15 will be unique since it’s “The Mutt-cracker” in partnership with the Birmingham Humane Society.

“They’ve had dog auditions for this,” Eva Pendleton said. “Some of the dogs dance and do tricks, and others are just there. It’s a comical rendition of the ballet meant to bring attention to dog adoption.”

The 2016 version of “The Mutt-cracker” brought national attention when the syndicated news magazine, “Inside Edition,” did a feature last year. The feature was called “Dog Named ‘Pig’ Upstages Sugar Plum Fairy In ‘Mutt-cracker’ Performance,” and is available for viewing on the “Inside Edition” website.

This will be Allison’s sixth year to dance on stage with a dog in “The Mutt-cracker.” This year she will perform with Amadeus, a 100-pound German shepherd.

Allison is a class officer at Spain Park and a member of the French Club. Additionally, she’s a Hoover Belle and a member of the junior board of “Magic Moments,” the Alabama version of the Make-A-Wish Foundation. She attends the Double Oak Community Church with her family, and plans to attend either at Auburn University or Mississippi State University and study architecture.

Eva and Les Pendleton have a son, Connor, a junior at Auburn University, where he studies public administration. He also serves as equipment manager for the football team.

“This has been an interesting year for Connor, too, as you might imagine!” Eva Pendleton said with a laugh.

Santa to visit Helena at various stops on Christmas Eve

By GRAHAM BROOKS / Staff Writer HELENA–The most wonderful time of the year is here and on Christmas Eve, Santa... read more